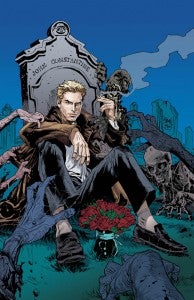 Man, when they said "Dark" they meant...dark. The long-delayed solicitations for DC Comics's "Dark Group" titles shipping in March 2013 finally rolled out yesterday afternoon/evening and there's just people dying all over the place. There's also some pretty interesting stuff happening that has nothing to do with death, so we'll just run down each issue. Constantine #1 "What Constantine learns in this first issue will shake the very foundations of the New 52…and only he knows how to deal with it!" Could what he learns have to do with the way he's been educating himself of late? 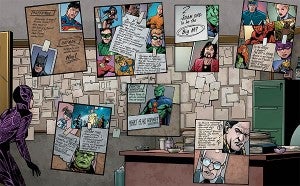 Considering he's the only holdover who managed to keep his role in Vertigo when the DC Universe was reborn, there's a decent chance they might reveal to him that he's been living a surreal double life for a while. That really could shake the foundations of the New 52, especially if that big, cryptic cork board has anything to do with Rip Hunter's big, cryptic chalk boards and we'll have two brilliant, secretive men--one of magic and one of science--who have sussed out information previously only known to gods and godlike beings about the true origin of the New 52. Justice League Dark #18 The conclusion to "The Death of Magic," eh? Well, that could mean the death of a character, or a major, House of M-style status quo change for magic as a whole in the DC Universe. It really could go either way. The status quo of the team would be changed up in either case, and there's always the chance the Orchid, none too happy with having had files kept on her, might bounce as well at the end of the story. Phantom Stranger #6 J.M. DeMatteis is the story here, of course, coming aboard the title to give DiDio some help not entirely unlike his old pal Keith Giffen did on the ill-fated O.M.A.C. series. But what of Brent Anderson? It could be as simple as he's not able to consistently hit a monthly deadline, but what if it's something else? He and Kurt Busiek did announce a while back that they would be bringing Astro City to DC, after all. And of course there's a job opening at Swamp Thing coming up soon... 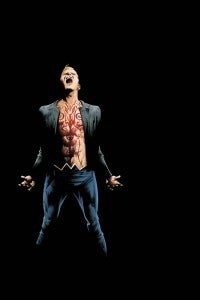 Animal Man #18 "The horrible tragedy of ROTWORLD weighs heavily on the Baker family." That's flat-out not a good thing to read. Lemire's Animal Man started out as one of the best books in comics but has been somewhat stagnant of late, but if shaking it up through messing with the Baker family dynamic is a risky move. Certainly risk should be rewarded sometimes, but it's hard to get your head around. My projection is that Maxine will have to remain behind as an avatar of the Red after the events of Rotworld, and the Baker family will have to come to grips with not having her close at hand, but she won't actually be dead. Any other ideas? Swamp Thing #18 What does DC have to say about it? • Swamp Thing makes the ultimate sacrifice in an attempt save the world from the Rot! • This issue marks the end of life as Swamp Thing knows it! And my thinking? This could jive with the idea of Maxine needing to remain behind...maybe Alec does, too? It's entirely possible we'll see the joined Snyder split. "The ultimate sacrifice" is just about as loaded as you can get. I, Vampire #18 "A major character dies in this issue as the struggle for Andrew Bennet's soul comes to a conclusion!" Who'd have thunk? Somebody dies!