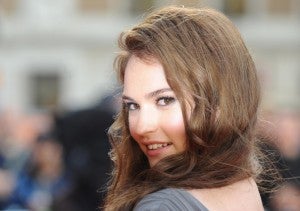 Walt Disney Studios have just announced that Lily James of Downton Abbey has been cast as the lead in Sir Kenneth Branagh's live-action adaptation of Cinderella for the studio.

The film also stars Cate Blanchett as the iconic evil stepmother, and while no other casting is currently locked down, the studio indicated that additional announcements regarding Cinderella are expected in the coming weeks.

After Branagh signed on in January, he considered Emma Watson of Harry Potter fame for the part, but she reportedly turned it down. When news she was being courted first leaked, it sounded as though she was a done deal for the movie, although three other actresses, including James, were already being talked to at the time.

Disney seems to have a real affection for Downton Abbey; not only was one of the series' stars being considered as the romantic lead in Captain America: The Winter Soldier, but there is a bit of a running joke with the show built into Iron Man 3.