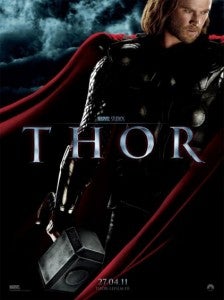 Thor seems to be a movie that is getting a variety of different reviews, and there was even quite a bit of disagreement among Comicbook.com writers. In fact, we decided to post three Thor reviews, because our opinions ranged from being disappointed to feeling it was middle of the road to thinking it was great.

The overall media reviews of Thor tend to be leaning heavily in the positive direction, but there have been a scattering of negative reviews. I think some reviewers have gone in expecting to see the next Dark Knight or Iron Man and are disappointed that they don't feel the movie quite reaches that level in their opinion.

I won't recap the movie, since that's been covered in our previous reviews, but I'll go into specifics on why I thought Thor was great. One area where I think the Thor movie is at the top of its game is in set design. The city of Asgard is nothing less that stunning. To recreate such a mystical realm had to be a challenge, and Asgard is a work of beauty. Thor has set a new bar for exceeding the expectations of what a comic book world can look like on the big screen.

The costumes are also very well done in the Thor movie. I've always felt that some of the Asgardian costumes have often looked outlandish in the comic books, so I could never see them being used in a movie in a realistic way. However, Thor nails it on costume design, and the characters looked better than I could have ever imagined them looking.

The Thor movie script is also solid. While there are few surprises to anyone familiar with the Thor background story, the movie succeeds in taking a very complicated story and putting it together in a way that makes sense. A lot happens in the Thor movie, and there is never a slow or dull moment. In fact, if anything, the movie comes across as rushed at times and leaves the viewer wanting more.

There are also many special treats for comic book fans in the movie. The Hawkeye appearance is one of the highlights of the film and left me excited to see more of the character. The funniest moment for me in the Thor movie was the Stan Lee cameo. I don't want to give it away, but it's a hilarious scene.

The acting in the Thor movie is either hit or miss. Because the movie does move at a fast pace, I did get the feeling that some of the characters and relationships were not well-developed. While I'm a big fan of Natalie Portman's previous work, she seemed somewhat out of place at times in Thor.

The actor who I thought stole the show was Chris Hemsworth, which is high praise indeed considering Thor had a couple Academy Award winners in supporting roles. Hemsworth was perfect casting for Thor, and he succeeds in really making the character come alive in a believable way.

Hemsworth defines Thor, just like Robert Downey, Jr. defines Tony Stark. I think Hemsworth knew this could be a breakout role for him, and he really put his heart and soul into the character. I think he should have the Thor role for as long as he wants it, and I'm really looking forward to seeing him on screen with Robert Downey, Jr. in the Avengers.

Overall I would give the Thor movie a solid A- or B+. There were definitely some things that could have been done better, but I thoroughly enjoyed the movie. As far as Hemsworth, he gets am A+.