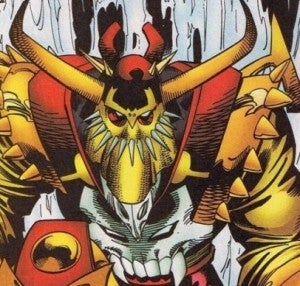 will see the hammer-wielding hero facing off against more than just Christopher Eccleston's Malekith the Accursed as Loki wanders the halls of Asgard.

Variety reports that Adewale Akinnuoye-Agbaje, star of Lost, The Bourne Identity and G.I. Joe: The Rise of Cobra, will appear as Algrim the Strong and his alter-ego Kurse in the upcoming sequel, which is currently filming in the U.K.

As Variety describes it, "Algrim the Strong was the most powerful of a race of Dark Elves, who is coerced by Malekith to fight Thor. After he's betrayed by Malekith and injured during a battle, Algrim is healed and transformed into a much more powerful being called Kurse, who is twice as a strong as Thor."

This will inevitably lead to speculation that The Beyonder--who is, after all, the source of Kurse's powers--may appear in the film, something that might fit nicely with the increasingly cosmic nature of Marvel's "Phase Two" films, including Guardians of the Galaxy, which is rumored to be taking over filming once Thor 2 wraps.

The "twice as strong as Thor" thing might also lend itself nicely to one of the other persistent rumors--that Loki may do an about-face and be much more heroic--or at least redeemable--this time around.

And if that's not enough rumor-mongering for one day, we've got another long-dormant rumor that might just have some miles left on it, courtesy Bleeding Cool.

Last night, it was announced that Kat Dennings would return for the sequel--and that report was based on a Deadline Hollywood report that indicated her role may be somewhat expanded from her last outing with the thunder god. Well, we'd forgotten that in the days before Dennings' role became clear the last time around, there was a lot of talk that she may be playing The Enchantress--a character who's been rumored to appear in this film. Putting two and two together, BC came up with the idea that there's an outside chance Dennings's character could turn out to be the character's human host.