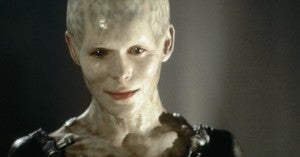 Alice Krige, who played the Borg Queen in a number of Star Trek installments from 1996 to 2004, has signed on to play a small role in Thor: The Dark World, according to the official Twitter account of last weekend's Star Trek Las Vegas convention.

"Krige has just been cast in Thor 2," tweeted the convention organizers. "But she says the part is small, we'll have to search to see her."

Bleeding Cool both speculates that she could play Alflyse, the queen of Svartalfheim and therefore the wife of Malekith, the film's central antagonist (being played by Christoper Eccleston), and notes that speculation about a minor role this early in production is probably fruitless.

Thor: The Dark World is filming now in London and is set for a release on November 8, 2013.