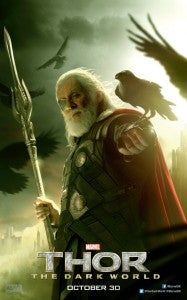 Warning: Spoilers ahead for Thor: The Dark World, currently in theaters.

The final moments of Thor: The Dark World left some fans and critics scratching their head and knowing that there just has to be a third Thor film now, because there's just too much up in the air to leave it at that.

Of course, there's not one currently on the schedule, even if Jaimie Alexander promises that there's a third film forthcoming and series star Chris Hemsworth has one more in his contract. We'll reportedly find out in the first half of 2014 which movies are going to get sequels between now and 2017.

But pressed for details as to exactly what to make of that ending, director Alan Taylor, star Anthony Hopkins and producer Kevin Feige all differed slightly.

The most telling thing, though, is that Hopkins seems to have said everything he wants to say about Odin, and sounds like he's not keen to come back for a third installment.

Feige was somewhat more diplomatic, saying that the studio had a pretty good idea of what they hoped to do with Loki and whether Odin is "still with us," but declining to speculate further.

It's director Alan Taylor--perhaps jet-lagged again?--who gave MTV the real whopper in the video embedded below.