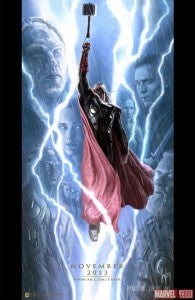 Warning: Spoilers ahead for Thor: The Dark World.

Of course, these spoilers come from the trailer shown to thousands of fans at San Diego Comic Con International, so it will likely be something that we see over and over again in trailers and promotional clips in the months leading up to the film's release in November.

In any event, Thor: The Dark World was presented at Comic Con and while most of the cast couldn't show up (clearing room for Guardians of the Galaxy to get more spotlight than the otherwise might have), they did show some footage and in that footage was what appeared to be a surprising loss for the title character.

"Is that the footage they showed?" star Chris Hemsworth asked Entertainment Weekly when they confronted him with the imagery of Thor apparently losing a hand. "I haven’t seen it yet. I’m trying to get hold of it somehow. I wish I could have been there. I can’t say too much more about it. But I will tell you that’s not the worst thing that he has to worry about along the way."

Asked what his character would do to cope with the loss, Hemsworth called back to an earlier part of the conversation, in which they'd compared elements of the film to Game of Thrones, a show on which Thor: The Dark World director Alan Taylor has been a creative force.

"Maybe I will have to learn to use the hammer with the left hand, you know?" Hemsworth said. "Or I was thinking of maybe just attaching it. I could ram it straight down into the stump. That would be very Game of Thrones in approach."