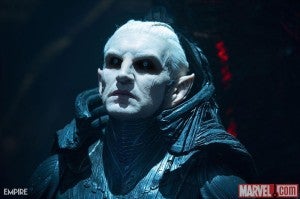 Marvel Studios have released a ton of new information pertaining to Thor: The Dark World, giving fans an idea of how the creative forces behind the upcoming sequel will be handling their corner of the Marvel Cinematic Universe and what to expect from the film itself.

With Malekith, the otherworldly villain in place, filmmakers were keen to give audiences relatable references and worlds. Director Alan Taylor was chief among those wanting to give the film grounding in reality, with a weathered texture and a grittier feel. Says Taylor, “When I came in, I wanted to get more of a sense of the Norse mythology, the Viking quality, the texture, the history and the weight.”

As a result, all aspects of Thor: The Dark World, —from the locations, the vast, largely exterior sets, the costumes, hair and make-up, to the armor, weapons, special and visual effects—have been carefully crafted to give a worn, humanizing, historical and grounded quality, with more nods to a Viking era than to science fiction.

Alan Taylor felt it was imperative that Thor’s home planet Asgard “feels like it has been there for centuries, that it has its own culture, that it really be a place you could believe in.” With these marching orders, production designer Charles Wood was tasked with bringing Asgard to life. “One big challenge was to make the film as fantastical as possible, because that’s the nature of this type of film, but also to ground the film and make the environments that we created tangible and realistic.”

Wood continues, “In the first film we were generally within the palace, whereas in this film we actually explore the city as well. We wanted to be true to the idea both within the Marvel Universe and within Norse mythology that Asgard was a golden city, but again we wanted to bring a sense of history to this world. We wanted to suggest that Asgard as an environment had been around for many thousands of years.”

To create Asgard and further worlds within the Nine Realms with believability, the director and filmmakers felt the best way to help achieve this was to use a combination of real locations and expansive, detailed sets, built largely outside.

Creating Asgard was the biggest challenge of all and also involved the largest number of sets. For their initial inspiration Wood and his team looked to the comic books and at all the material they could find on Thor and the environments that writer Kirby had produced. They then took their research wider, as Wood explains, “We also looked at images on the Internet, whether architectural or whether it was atmospheric, anything we could find that we felt could have related to the film. We studied all sorts of different historical and modern architectural influences, whether it was Byzantine, Romanesque, Gothic, Chinese or Islamic architectural forms. We also studied light and atmosphere. We then went to the studio and met everyone and Alan Taylor and got their take on it and from that point we essentially started conceptualizing.”

The film shot between October and December 2012 at Shepperton Studios in England, with key locations in London—Greenwich, Wembley, St. Paul’s Cathedral, Borough Market and Hayes—Bourne Wood in Surrey and Stonehenge in Wiltshire, England, and Iceland.

You can check out a bunch of the quotes below, as collected by One8One.

Thor: The Dark World producer and Marvel Studios President Kevin Feige on Stan Lee and Jack Kirby's approach to the character: "A lot of people were familiar with the Greek and Roman mythologies, not so much with the Norse. When you read those stories, it’s like the best of the Marvel Comics, because it’s people who are very human, despite their powers—despite their calling down the storm, the thunder and the lightning. They have family issues, in the two brothers fighting, Thor and Loki. It’s a family drama and they’re just as flawed as any of us, or any of the Marvel heroes. That’s what makes the Marvel characters so relatable."

Screenwriter Christopher L. Yost on Loki, and following up on the events of Marvel's The Avengers: “We really wanted to look at how you could escalate the story personally for him and push things to the next level in terms of conflict.”

Director Alan Taylor, describing Thor’s journey: “In the first film, we saw Thor go from being an impetuous prince to taking his first steps towards maturing and growing up, and in our film that life story continues. He’s moving closer to actually claiming the kind of power that comes with Odin. He’s becoming not just a man, but potentially a king as well. In this story, as Thor matures and deepens, he has to give some things up and suffer.”

Chris Hemsworth, who plays Thor: “I love playing the character. The trick is each time to find new ways to make the character have some sort of advance or growth from the last one,” explains Hemsworth. “I think you’ve got to make sure the hero is a big catalyst to the resolution from the beginning, that he’s not just there to step in at the very end and save the day. He has to be proactive throughout. There’s a definite conflict within Thor about where his place was. Was it with Jane on Earth or was it in Asgard, and where does his allegiance lie? Also, he's beginning to understand the darker sides of what it truly means to be king and the burden of the throne.”

Natalie Portman, who plays Jane Foster: “It's really fun to get to come back and play her again. I think it’s rare to get the opportunity to play these female scientists in this kind of movie, so it’s nice to have a foil for the super hero!”

Kat Dennings, who plays Darcy Lewis: “People seem to love Darcy,” notes Dennings. “I love Darcy. And because she’s not in the comic books, she was born out of my imagination. So the fact that people like her is just really flattering.”

Stellan Skarsgård, who plays Erik Selvig: “It was cold. I’d recommend clothes at Stonehenge. The English climate is not suitable for streaking!”

Anthony Hopkins, who plays Odin: “I enjoyed the first one with Chris Hemsworth and Tom Hiddleston. I have scenes with Natalie Portman—she's beautiful and lovely—and Kat Dennings and Chris. They’re terrific people to work with; very easy, gentle and relaxed people.” The actor confesses he doesn't know too much about Marvel mythology, or Norse for that matter, but explains, “I just play him like a human being, with maybe a little more dimension. I grow a beard, look hopefully impressive and try and keep it as real as possible.”

Jaimie Alexander, who plays Sif: “I have to say Sif is one of the favorite characters I’ve played,” says Alexander. “She’s probably closest to my personality out of everything I’ve done. She’s a butt-kicker and I like that!”

Ray Stevenson, who plays Volstagg: “You get a chance to see Volstagg with his family, which was a big surprise. I’ve got these naughty cherubic sort of bouncy kids, which is just a lot of fun.”

Zachary Levi, who will join the cast as Fandral: “I like the character of Fandral. He’s different to anything I’ve ever been able to play. He speaks with an English accent, is very blunt and is a total lothario, lady’s man. I love all that; it’s just really fun. He’s very Errol Flynn.”

Christopher Eccleston, who will play Malekith: “I wanted Malekith to have a sense of humor, because I think a sense of humor indicates intelligence and if you’ve got an intelligent villain that means that your heroes have to be really accomplished to beat them.”

Adewale Akinnuoye-Agbaje, who plays the dual roles of dark elf Algrim and Kurse: “I think every boy and girl grows up with super heroes, comic books, Marvel in their childhood, so to be part of that history, it’s a privilege. I suppose Algrim and Kurse would be the quintessential baddies, but in reality they are what I perceive as the scorn and the victims of the story. They are the elves who have basically lost their planet and their race to another race, the Asgardians.”

Tom Hiddleston as Loki: “I feel like ‘Thor: The Dark World” is a chance as an actor to find new depth, new dimension, new iterations of Loki’s psychology, of his physicality and his capacity for feeling. On one level he is an off- the-rails psychopathic agent of chaos, but on a human level, his psychology and his emotional landscape is very, very interesting because he’s so intelligent and yet so broken. This film is a chance to find where his capacity for heroism and his Machiavellian menace meet.”

Thor: The Dark World - The Cast and Crew Shed Light on the Next Big Marvel Sequel