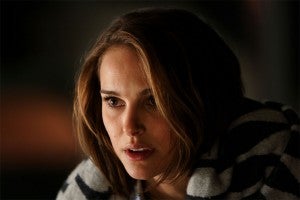 In a new interview in SciFi Now, Thor: The Dark World star Natalie Portman said that she thinks--and not just thinks, but has heard presumably as someone who's a bit of an insider at Marvel--that a female-led Marvel Studios superhero movie is coming sooner than later.

She added that, in general, Marvel's movies feature strong women and that it's her impression that the corporate culture at the studio is very female-friendly.

One step backwards that Thor: The Dark World took--and something that alienated them a bit from Portman in the early going--was that before the movie began filming, it lost director Patty Jenkins, who was expected to be the frist woman to direct a Marvel Studios film. Portman had expressed excitement to work with Jenkins and then publicly expressed disappointment when she exited the project--something that rumor had it at the time contributed to an overall sense of unhappiness for Portman, who reportedly asked to be released from her contract before the second movie began shooting.

"I was very upset because Patty Jenkins is a wonderful woman," Portman said. "I was excited to work with her but I understood why she chose to leave and Alan Taylor is really wonderful, so it was bittersweet."