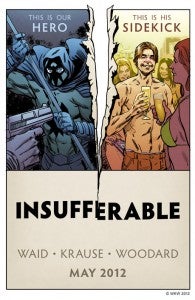 John Rogers, the co-creator of TNT's Leverage whose comic book street cred includes runs on DC's Blue Beetle and IDW's Dungeons & Dragons, will join Mark Waid tomorrow for the launch of Thrillbent, a digital comics initiative that blends aspects of traditional comics, webcomics and the kind of new approach to digital comics storytelling that Waid displayed earlier this year with Luther and AvX: Infinite. "One of the cool things about this new form of digital comics, is that you'll be able to take some screenwriting and editing storytelling techniques and bring them to the printed page in a way you couldn't do before," Rogers told ComicBook.com in an interview for our Panel Discussions podcast which will run later this week. If all goes according to plan, there are a few surprises that will make their way onto the show this week as well. At a time when Before Watchmen and The Avengers have many fans and creators talking about the virtues of creator-owned material, Rogers said that segment of the market is the one that needs change most. "Most people just don't know the horrible numbers" surrounding self-published comics," claims Rogers. He said that critics of Waid's approach call the writer a naysayer and say he is implying printed comics aren't economically sustainable. "It's not that he says it's unprofitable," Rogers explains. "It's unprofitable! Those numbers are fixed; they are inalterable." Rogers, who has worked in television for years (including on the failed pilot for Warren Ellis' Global Frequency), adds that "One of the things I'm always kind of stunned about working in comics is that we spend a lot of time in television and movies figuring out distribution costs and studying our audience and comics really is seat-of-the-pants and has been seat-of-the-pants for so long that it's kind of a shocker when somebody sits down and goes, 'These numbers are just awful.'" He said that digital is naturally the way to go, from a business point of view. "There are people who are selling enough books to make a living on Amazon, whom you've never heard of. Because Amazon made digital delivery cheap and easy," Rogers said. "That is what you must do with comics. It's not hard. The music business already solved this problem. Amazon already solved this problem. It's not like we're trying to build a rocketship to the moon out of cardboard boxes. Webcomics guys--and this is kind of the great heresy--solved this problem like ten years ago, using digital distribution then doing print collections and also doing advertising and stuff. " Creatively, too, he's convinced of the potential for what they're doing at Thrillbent. "The cool and tempting thing, is that ability to hold back or to make the stuff that he and Stuart [Immonen] did in the [AvX: Infinite] initiative, where you're able to have different people changing faces on the same page and changing reactions," Rogers said. "Once you turn the page in a physical comic, that page vomits up everything on it. Even now, I'll be writing something and I'll realize, 'Nah, that's an odd-numbers page; it's going to be sitting right there on the opposite side. I have to change this reveal over to an even-numbered page or else it's not a reveal.' There are certain storytelling advantages to this experiment that we think are going to be cool and exciting." He also told us that the style of digital comics that they're interested in creating--one that features no animation or sound, but resembles what fans have seen from Waid recently--is something that came about in some of the pair's earliest conversations about what makes comics...well, comics. And "comics" in this case includes the aforementioned webcomics creators, just so it's been said. Rogers told us that getting the mainstream comics community to embrace webcomics as a business model or even an art form has not always been easy. "It was really interesting in the first part of this--when we talked about different models that we'd seen that were successful, Mark and I would talk about webcomics and regular, traditional comics guys would look at us and go, 'Well that's not comics.' Yes it is! It's storytelling with words and pictures, and they make a living doing it. So why are you who basically are working on somebody else's intellectual property for a living, looking down your nose at them? go look and see what those guys did. They have audiences that are bigger than the audiences in comics shops--or at least different, or at least mainstream. I don't care how you define it." "We had talked a lot about--especially becuase I work in a lot of different media--what defines the different media and what defines your experience with them," Rogers explained. "I talked early in my writing about how television is the entertainment space and how difficult it was to transition from television to computer and that you basically need a whole new generation of people for whom the computer is the screen before that becomes a viable distribution system, which is what you've started to see in the last five years. And when it came to comics it really was, 'You must control the flow of information.' You control the page turn and we must adapt the entire attempt around that--around the idea that the reader controls when new information is introduced." Look for more from our interview with John Rogers tomorrow, and be on the lookout for a very special edition of the Panel Discussions podcast featuring Rogers and others later this week.