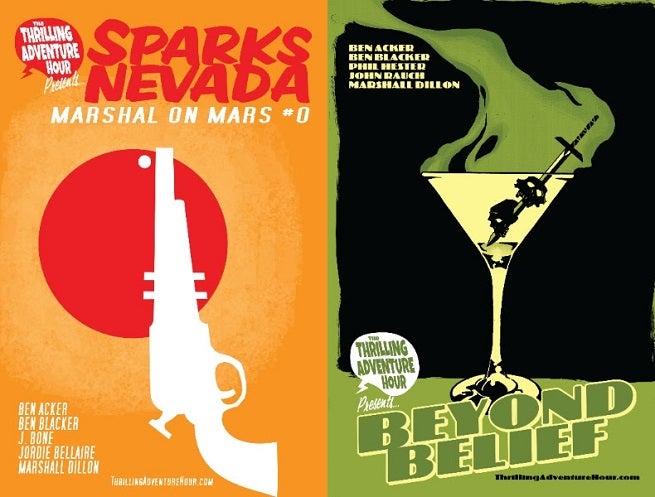 In a world where Kevin Smith is making his second consecutive film based on a half-joking idea thrown out during one of its podcasts, it shouldn't be any surprise that a show as wildly popular as Thrilling Adventure Hour could spawn a pair of comic book series.

This February, Ben Acker and Ben Blacker are headed to Image Comics with two all-new series inspired by the hit Nerdist podcast.

You can check out the official descriptions below:

For Thrilling Adventure Hour Presents Sparks Nevada: Marshal on Mars #1 you’ll want to shine your astro spurs and don your robot fists! Justice rides a rocket steed across the crimson plains of the fourth planet, where one man brings fear to robots and aliens... and hope to humans who make this frontier planet their home. He is... Sparks Nevada: Marshal on Mars by Acker & Blacker, J. Bone, Jordie Bellaire, and Marshall Dillon.

In Thrilling Adventure Hour Presents Beyond Belief #1, by Acker & Blacker, Phil Hester, John Rauch, and Marshall Dillon, it’s time to send the little ones to dream land and set your radio’s dial to “spooky.” Steel yourself for mysterious suspense in… Beyond Belief! Meet Frank and Sadie Doyle, toast of the upper crust! Headliners on the society pages. And, oh yes… they see ghosts! Who cares what evil lurks in the hearts of men… unless evil’s carrying the martini tray!

"We are tremendous fans of Image, both the caliber and quality of books they put out,” said Acker and Blacker in a statement. “We couldn't be more (ahem) thrilled to be producing books with Image, the home of so many of our favorite comics and creators. We're excited for the Thrilling Adventure Hour to be a part of the Image family, for that big 'I' is a seal of quality."

Both series will launch from Image Comics in February, and the Image Comics booth (#1544) will host a special group signing for the crew—Ben Acker, Ben Blacker, Hal Lublin, Craig Cackowski and Autumn Reeser—on Friday from 12:30-1:30 p.m. at New York Comic Con.

Thrilling Adventure Hour will be at booth #888 at NYCC for additional signings and exclusive merchandise.