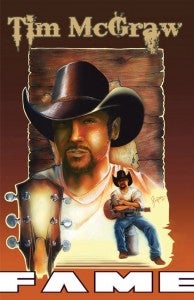 Tim McGraw is a country music superstar and actor, and now he can add comic book star to his resume. Bluewater Productions has announced that Tim McCraw will be the latest celebrity to get his own biography comic book. Tim McGraw has sold over 40 million records, had 21 consecutive albums hit number one on the Billboard Charts, and has starred in movies such as The Blind Side. Bluewater Productions will tell his story in FAME: Tim McGraw, which is scheduled to arrive in comic book stores this September. The Tim McGraw bio-comic is written by David A. McIntee with art by Jed Mickle. Th cover is painted by William Sleeper. "It was fun to do," McIntee said, of working on the comic. "Tim has had a wider career and area of interest than people might think. I loved the chance to do something with a hint of the Western, to go with the musical genre. I think his fans will enjoy that tone to it. Tim McGraw is actually the second country artist to get a bio-comic from Bluewater Productions. The company also recently published a Taylor Swift comic book. "With our biographical comic book series—FAME, Female Force, Political Power, etc.—we have the unique opportunity to showcase a wide range of notable figures," explained Bluewater Productions' President Darren G. Davis. "We are getting young people excited to read by releasing comic books featuring the role models that they look up to the most."