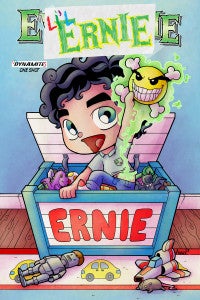 Fresh off the announcement that they will be bringing back characters from the defunct Gold Key Comics behind an all-star lineup of creators, Dynamite Entertainment announced today that Hack/Slash and Revival creator Tim Seeley will resurrect Chaos Comics in a six-issue miniseries with artist Mirka Andolfo for the publisher. "The Chaos! universe gave rise to the kind of comics that would, depending on your age, make you hide them under your bed, tattoo the characters across your body, or paint them on the side of your van," Seeley says in a press release from Dynamite. "Their characters inspired such intense reactions from readers. I want to be part of that. I want to really harness what made characters like Purgatori, Chastity, Evil Ernie, and The Omen so unique and special both for existing fans... and a whole new generation with room under their beds." Dynamite previously acquired the Chaos Comics library in 2010, and has announced a few projects featuring the characters since. Seeley himself drew a variant cover for a 2012 Evil Ernie series from the publisher. As part of their "Li'l Dynamites" miniseries in 2014, Evil Ernie will be featured in a kids' book. Which is...awesome.