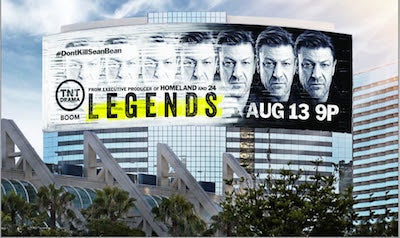 TNT is coming to Comic Con International: San Diego later this month, its established hit Falling Skies with it as well as Legends and their top-rated new series The Last Ship.

Below is a complete rundown of TNT's initiatives for Comic-Con International: San Diego 2014.

TNT's Comic-Con invasion will begin with the Legends takeover of San Diego International Airport, marking the first time a brand has ever taken over the airport (in the past, it's been mostly the San Diego Padres who have a ton of advertising to those just getting off the plane).

Travelers flying into San Diego the week of July 21 will be greeted with Legends imagery and messaging throughout the airport, including at baggage claim carousels and on escalators and skyway bridges. The Legends messaging will also extend to other parts of San Diego, with eye-catching billboards in the Gaslamp Quarter.

During Comic-Con, TNT is set to feature a Legends panel with cast members Ali Larter (Heroes), Morris Chestnut (American Horror Story, Nurse Jackie) and Tina Majorino (Grey's Anatomy, True Blood), and executive producers Howard Gordon (Homeland, 24) and David Wilcox (Fringe). The session will open with a screening of the entire first episode of the series. Following the screening and panel, Legends cast members are set to participate in an autograph-signing session.

TNT is teaming up with CraveOnline to rock Comic-Con with a Friday night party celebrating The Last Ship aboard the USS Midway. The party will feature a live performance by psychedelic rock duo MGMT, with Canadian producer-musician-singer-songwriter Grimes set to open.

TNT will also present a panel set to feature The Last Ship stars Eric Dane, Rhona Mitra, Adam Baldwin and Charles Parnell and executive producers Hank Steinberg and Steven Kane. The session will include Q&A from the audience and exclusive video clips previewing what's to come during the rest of the first season.

The network is transforming the Falling Skies booth at Comic-Con into an alien cocoon that plays a pivotal part in the July 27 episode. Comic-Con attendees will have the opportunity to pose for pictures inside the large, translucent cocoon, which features fluid-pumping vessels and atmospheric lights and sound designed to make the entire structure look alive.

In addition to the booth experience, Falling Skies stars Noah Wyle, Moon Bloodgood, Drew Roy, Will Patton, Sarah Carter, Maxim Knight, Scarlett Byrne and Doug Jones and executive producer David Eick are slated to participate in a panel on the show's current fourth season. The Falling Skies session will also include video clips from upcoming episodes, plus the world premiere of the trailer for the upcoming video game Falling Skies: The Game.