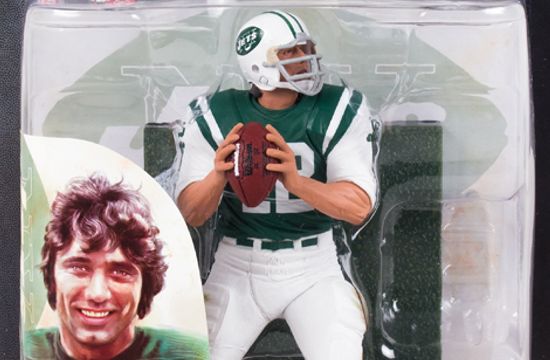 On Saturday, February 1, Todd McFarlane will be appearing at Times Square Toys “R” Us store to do a special event signing of Joe Namath NFL Legends and Eli Manning NFL Super Bowl figures. In an interview with Comicbook.com, McFarlane touched on the thought process that went into the Joe Namath and Eli Manning figures. He also talked about the difference between making pro-sports and college figures, as well as revealing who he’s rooting for in Super Bowl XLVIII.

Comicbook.com: How did you do the sculpting for the Joe Namath and Eli Manning figures? I know with some of your figures you do full body scanning of the people involved. Is that the case with Namath and Manning?

Todd McFarlane: No, we were trying to do a youthful Joe Namath. So trying to capture his late sixties heroics, coming and winning the Super Bowl for the Jets. We were even debating whether we were going to put a knee brace on him. Remember he started wearing that in some of the back half of his career. But we decided we were going with a healthy Joe, so at that point then you’ve got a guy who was in his mid-twenties. The answer was no with him.

For Eli, we don’t get much of a chance to get a lot of the athletes. We usually use the scanning a lot more with a lot of the TV and movie stars that we do, because they are on set in the same place sometimes for sixty days.  It’s easier to get them scheduled for that one day. Sometimes with the NHL we use to go to like the All-Star game and have a chance to grab a bunch of guys during the All-Star break. But that was again you had a bunch of people sitting in one spot.

But I believe I’ve got the best portrait artists in the country, and they’re really good. The thing I like with a Joe Namath is that he’s got that little dimple in his chin. I thought my boys hit it dead on with him, but by the time you put the helmet on and you put the chin guard on you take away some of the cool features that would [make] you necessarily go, “Oh, that’s Broadway Joe right there.”

Comicbook.com: Since you’re going to be doing the signing at Toys R’ Us in New York on the day before the Super Bowl, are you going to get a chance to go to the Super Bowl as well?

Todd McFarlane: Yeah, my daughter graduated from NYU, so she’s been living in that area. And I went, “Hey, they’re going to be having the Super Bowl out in your neck of the woods, so when it comes I’ll take you.” So she’s out in the Philadelphia region right now, but she’s going to take the train in. It’s either going to be the coolest game ever in terms of it being bad weather, real football or it’s going to be the worst game ever. I’ve got a feeling that for the fans and the audience it’s going to be one or the other. I think after this game the NFL is either going to say, “Yeah, let’s do more of them,” or they are going to go, “Never, ever do that again.”

Comicbook.com: Which team are you rooting for?

Todd McFarlane: I can’t say that either one is a big fave, but if I have to put two dollars down, I’m going for Denver. My daughter says she’s going for Seattle. So one of us is walking out with a smile.

Comicbook.com: You’ve done a couple lines of college football figures in the past. Do you have any more of those in the works?

Todd McFarlane: I think we’ve got one coming. And again, sometimes it can be a little bit difficult with the college, as you know, and the same is true with pro-sports, it seems to be magnified just a little bit more with the college, there’s a lot of loyalty in terms of college sports. You put out a Sooners, you’re not going to be to get any of the other Oklahoma fans that root for any of the other teams to root for it. You’re probably not even going to get any Texas fans. And they’re very loyal to that team, which is a little bit different than the NFL. Even though you might be a Denver Broncos fan, you still might pick up an Adrian Peterson, because you know he’s good or you have him in your fantasy football league or something like that. Where the college has a tendency to be a little bit closer to what happened to us when we did NASCAR. You know, they would buy the guys that drove the Fords, and anybody that drove a Chevy was like the bad guys, right. It’s like being a Red Sox fan, and going “I’m not buying no Yankees stuff.” So we found in the college there’s a little bit of that mentality too. They’ll buy their favorite guy and sort of turn their back on everybody else. And most of the other pro-sports, you can sometimes get people to buy multiple teams and multiple players for various reasons. It’s like we collected cards when I was a kid. You had your favorite team, but you still wanted to have all the players, and there was no bias if it happened to be a guy from a team you didn’t like.

Comicbook.com: Is the licensing any more challenging with college sports? Do you have to approach each school individually?

Todd McFarlane: It’s a little bit of a mish-mash. One of the things that’s nice is that they’ve begun putting together some consortiums that license. Like we get a couple licenses in college in which there’s a branch which may have the license for twenty schools. So instead of having to go to five different schools, we can go to one person, and they actually have the rights to say, “Oh, yeah, you can have that school, that school, and that school.” Unfortunately, those sort of ventures and organizations don’t have access to all of the schools, so you have to then find the other consortium that might have some of them. Or you just have to go to individual schools, and say, “Hey, we’ve done it before. Here’s what we’ve done. Here’s the going rate. Here’s the people we’ve contacted before. You can ask them if we’re legit. Here’s product that we’ve done. Is there any interest in doing any of it?” Again, it can sometimes be a bit of a challenge, but it’s what you do. I knew what we were getting into when we started getting into the licensing business.

Previously, McFarlane updated us on the status of the Spawn Movie and a new product line for The Walking Dead. Keep checking back over the upcoming week for more from our Todd McFarlane interview.