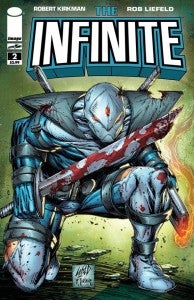 has announced that Todd McFarlane will be doing a variant cover for The Infinite #2. The variant cover will actually be a collaboration between McFarlane and Rob Liefeld. McFarlane will do the inks, while Liefeld does the pencils to create a look that shows off the signature styles of both artists.

The Infinite comic book series is written by Robert Kirkman, who is the creator of The Walking Dead and Invincible. Artwork is by Rob Liefeld, who created Deadpool, Cable and Youngblood. The Infinite tells the story of “an aging freedom fighter who must travel back in time to team up with his 20-year-old self in order to save the world.”

In regards to the McFarlane variant cover, Liefeld said, "It was a treat to work with Todd again! I couldn't wait to see how it would turn out, and it was better than I expected! We're both really pleased with this cover, and I think the fans will agree."

"If you remember Rob's work on New Mutants back in the early '90s, then you definitely remember the fantastic covers Rob and Todd collaborated on for that series," said Image Comics Publisher Eric Stephenson. "They make a great team, and considering this is only the second time they've done a cover together in over 20 years, it's a true event!"

The Infinite #2 is a 32 page science fiction action comic, which will be released in comic book stores on September 14, 2011. In addition to the McFarlane variant, there will be other limited variant covers for the issue.

Todd McFarlane To Cover The Infinite