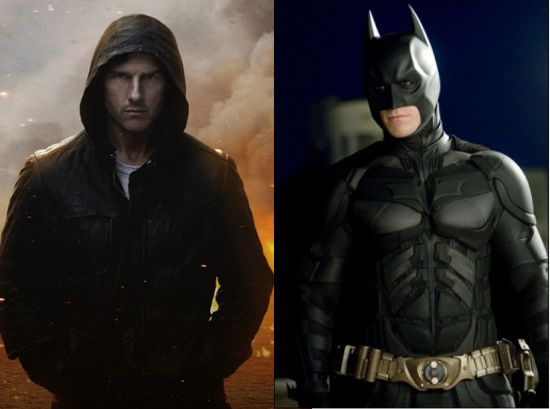 Tom Cruise isn’t the box office powerhouse that he once was. His last two movies, Knight & Day and Valkyrie, failed to cross the $100 million mark at the box office. While Tropic Thunder did hit $110 million in 2008, Cruise only had a supporting role in that film. To find the last film that Cruise headlined that crossed $100 million, one must go all the way back to Mission Impossible III in 2006.

Combine Cruise’s recent lack of box office pull with the fact that last weekend was the worst U.S. box office in three years, then we would guess that Paramount Pictures was likely sweating bullets over the release this upcoming weekend of Mission: Impossible – Ghost Protocol. But if Paramount was worried about their estimated $140 million investment, they can now breathe a little easier thanks to Batman.

Buzz on social media sites like Facebook, Twitter, and Google+ is also high about The Dark Knight Rises prologue with many announcing their plans to see the prologue this weekend. While it might seem odd that a six minute prologue would be enough to drive people to buy tickets to another movie, that appears to be exactly what is happening. Many who might have otherwise waited to see Mission: Impossible – Ghost Protocol on DVD are now finding it worthwhile to plan on seeing the movie on the big screen. And because the Dark Knight Rises prologue is only playing in select IMAX theaters, it will also help drive higher-priced IMAX ticket sales for Mission: Impossible - Ghost Protocol.