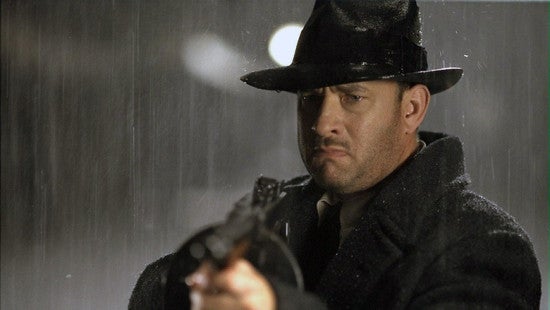 Too bad The CW elected to go a younger route when they cast Barry Allen on Arrow; maybe they could have persuaded Oscar winner Tom Hanks to return to television so he could don the red tights.

Well, probably not. But in a recent interview with Showbiz 411 (embedded below via CBM), Hanks said he wants to play a major role in a superhero movie, suggesting first that he'd be a supervillain but then adding that he  wants to "get in there," and citing The Flash as a particular character he's got on the mind.

"No, [it's not a choice], they don't ask me and I keep trying," Hanks said in an interview promoting his new movie, Captain Phillips. "Come on, I can do it [laughs]. Let me play a bad guy, let me play the bad guy against Batman. I'll do anything, call me. They've never asked. What do I have to do? God, I want to throw a shield at somebody. I want that. And I don't want to play the guy in the suit who tells the superheroes what's going on, I don't want to be that guy. 'Well, you know Batman...Captain America, Iron Man, here's what we've discovered', I don't want to be that guy. I want to get in there, I want to play The Flash or something like that. They'll never give me a chance."

What do you think, folks? A new candidate for Lex Luthor emerging for the Batman vs. Superman movie?

Of course, Hanks has indeed played a comic book hero before--but not in the way he's thinking. He appeared as the lead in the adaptation of Max Allan Collins's graphic novel The Road to Perdition.