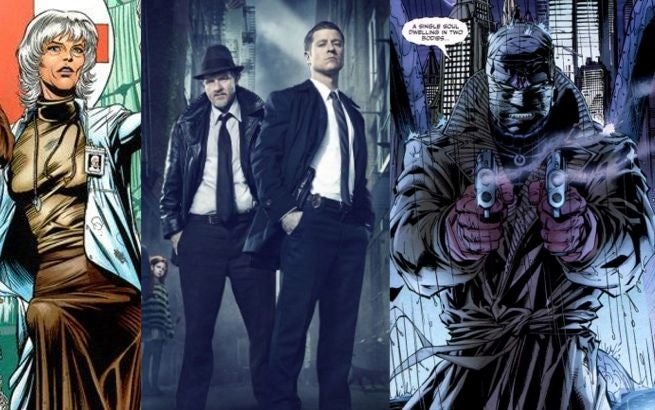 A slew of new Batman characters are headed to Gotham, the show's cast and crew revealed (via IGN) at New York Comic Con today.

Leslie Thompkins, a doctor who runs a medical clinic for Gotham's needy, is set to debut on the show soon. According to executive producer Danny Cannon, Thompkins will arrive "at a very tough time in Jim Gordon's life." Cannon also said that a casting announcement for Thompkins will come this week. Leslie Thompkins holds an important place in the Batman mythos, serving as both a medical aide and conscious guide to the Dark Knight and his allies. In many iterations of Batman's origin, Leslie Thompkins was also the one to comfort Bruce Wayne through the night of his parent's murder.

Tommy "Hush" Elliot is also set to appear on the series, though only as an "Easter egg," according to Alfred Pennyworth's Sean Pertwee. A childhood friend of Bruce Wayne, Tommy Elliot would grow to hate the Waynes, and targeted the Dark Knight as "Hush" after deducing Bruce's secret identity. Hush was introduced into the DC Universe in the wildly popular "Hush" storyline by Jeph Loeb and Jim Lee, and is the primary villain in the weekly "Batman Eternal" series.

Finally, Harvey Bullock's Donal Logue said that a young Victor Zsaz, who will eventually grow to become the murderous Batman villain Mr. Zsasz, will appear on episode seven. Logue called the upcoming appearance a "stunning early portrayal of that character."

The next episode of Gotham, "Arkham," airs Monday on FOX.