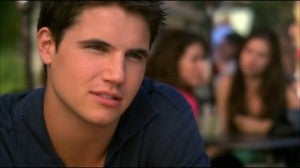 Robbie Amell, the brother of Arrow star Stephen Amell, has been cast as one of the leads of The CW Network's Tomorrow People. Amell, ironically, will star as Stephen in the series. Written and executive produced by Phil Klemmer based on the cult British series, executive produced by Julie Plec and Green Lantern's Greg Berlanti and directed and executive produced by Danny Cannon, Tomorrow People revolves around several young people from around the world who represent the next stage in human evolution and work together to defeat the forces of evil. Originally the series ran in the 1970s, with a remake in the early '90s. Mad Men's Peyton List was recently added to the pilot's cast, as well. Amell is, even beyond his brother, not an unknown quantity to Warner, the studio behind the CW. He's starred in their direct-to-video Scooby-Doo live action movies as Freddie.