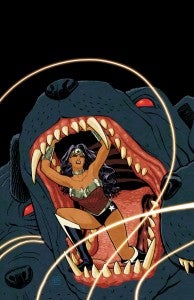 DC Comics just released the solicitations for January product from its Justice League line of comics, and it answers a nagging question left over from last week's announcement of 2012's New 52 collected editions: Cliff Chiang, the artist on Wonder Woman, will be absent from the interior art on the series's upcoming sixth issue. The book will still ship with a Chiang cover, seen at left. No comment yet on whether he's been replaced or (more likely) whether this is simply a fill-in artist by artist Tony Akins, but since all of the New 52 collected editions have at least six issues in them, it's likely the first volume will contain this issue and that DC simply didn't want to let the cat out of the bag too soon. Expect an announcement of the Wonder Woman collected edition to come this week, and hopefully a clarification as to the future of the book's creative team as well. Brian Azzarello remains writer on the series, which appears to be continuing unaffected by the art change with its sixth issue. The title has made national headlines since it was announced by numerous minor costume changes to the title character, followed by a bombshell revelation about her origin in the as-yet-unreleased fourth issue.