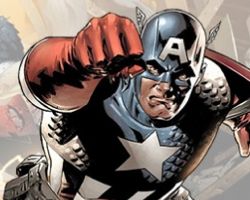 No, we’re not going to just show 10 Captain America covers. What would be the fun in that? Even though the good Captain is well represented, there are numerous comic books that have had patriotic covers throughout the years. In order to celebrate the upcoming Independence Day, Comicbook.com has selected our Top 10 Most Patriotic Comic Book Covers of All Time. Some of the covers on the list are likely to turn out to be controversial choices, and there are likely to be some covers that we overlooked that belonged on the list. While there are literally thousands of comic book covers depicting superheroes in various patriotic poses, we tried to give some representation to other types of comic books as well, and not have it all be just about superheroes. We also tried take into account the historical significance of the cover (especially as we got to the top of the list). 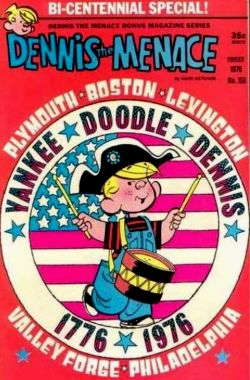 10. Dennis The Menace #153 – We start off our list with a fun comic book. After all comic books aren’t just about superheroes, they occasionally are for kids and teach important historical lessons. There were numerous special covers celebrating the Bi-Centennial in 1976, but the one we selected as our favorite was Dennis The Menace as Yankee Doodle Dennis. 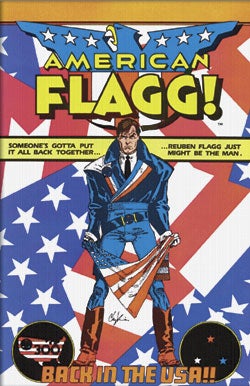 9. American Flagg #1 – Looking at the cover you might expect the typical flag waving superhero, but American Flagg was a well thought out satire on the state of a future America. Published by First Comics, it will go down in history as one of the greatest Independent comic books of the modern era. In addition to being a great cover, it was also a great comic book. In fact, if we were judging on inside content and not just the cover, then it would probably be #1 on the list. 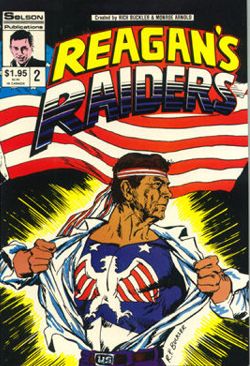 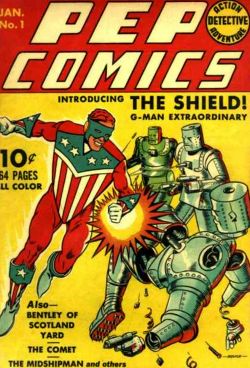 7. Pep Comics #1 – There are many superheroes with costumes drawing heavily on the American flag, but The Shield has the distinction of being the first. While pretty much forgotten to the mainstream public, The Shield even pre-dates the much more well-known Captain America. The Shield was the first of many patriotic superheroes and his first cover deserves distinction because of that fact. The Shield premiered in Pep Comics, which is a comic series that would later introduce America’s favorite teenager, Archie Andrews. 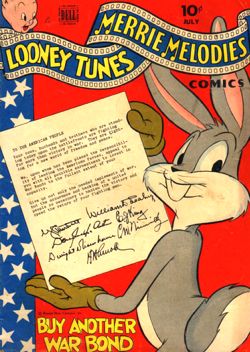 6. Looney Tunes And Merrie Melodies #45 – During World War II, many comic book publishers jumped in to help promote War Bonds. It was tough to pick from all the classic covers featuring a variety of comic book characters promoting the U.S. war effort, but we thought this Looney Tunes and Merrie Melodies cover featuring Bugs Bunny holding a letter from important American figures encouraging the American people to buy war bonds was one of the most effective. It also won points for the red, white, and blue background. 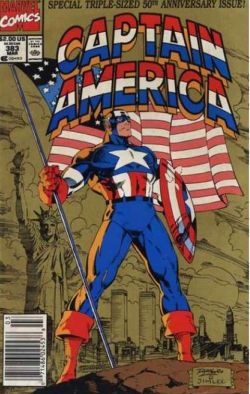 5. Captain America #383 – This cover features Captain America holding an American flag with the Statue of Liberty and the Twin Towers in the background. While this Captain America cover might look like it is a commemorative cover for 9-11, it was actually published a decade before 9-11. What makes this cover so special is that it has an even bigger patriotic meaning now than when it was originally published. 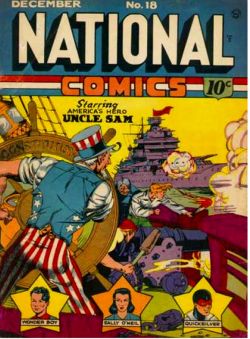 4. National Comics #18 – National Comic might be the most patriotic comic book ever produced. It starred Uncle Sam, the national personification of the United States. There were many great patriotic covers during National Comics’ run, but the one we selected as our favorite was National Comics #18. Like Captain America #383, part of the appeal of this cover is that it means more now than when it was first printed. The cover shows Uncle Sam defending Pearl Harbor from enemy attack and was published a month before the Japanese bombed Pearl Harbor. One sidenote though is that in the story inside, it is the Germans and not the Japanese that attack Peal Harbor, but still the site of Uncle Sam behind the wheel of the Constitution defending Pearl Harbor has to rank as one of the patriotic covers ever. 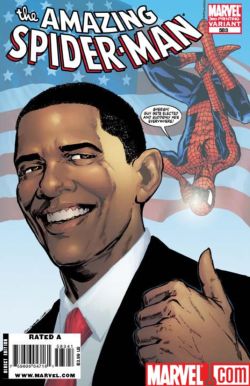 3. Amazing Spider-Man #583 – To have such a recent cover so high on the list is sure to create controversy. The reason we chose the cover for Amazing Spider-Man #583 is because the comic book will likely become part of history. It captured the historic event of the inauguration of the first African-American President in the history of United States. While any of the multiple covers for the various printings of this historic comic book could be labeled as patriotic, the variants that also included the American flag stood out as being especially patriotic. 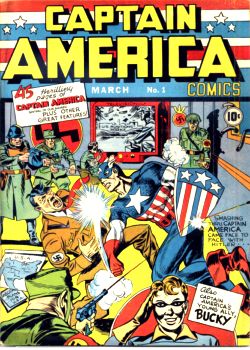 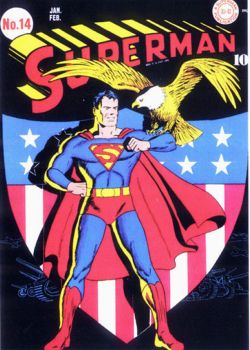 1. Superman #14 - We will probably catch some grief for not picking a Captain America comic book to be #1, but we felt we had to go with Superman #14. This cover was released shortly after the Japanese bombed Pearl Harbor. The cover is simple in its elegance, beauty, and power. It’s not overdone with symbolism like so many patriotic covers are. Instead, the cover is simply Superman against a red, white, and blue shield with an eagle landing on his arm, and light traces of weapons of war in the black background. Superman #14 elevated Superman beyond being just a comic book superhero but firmly established him as a symbol for America.