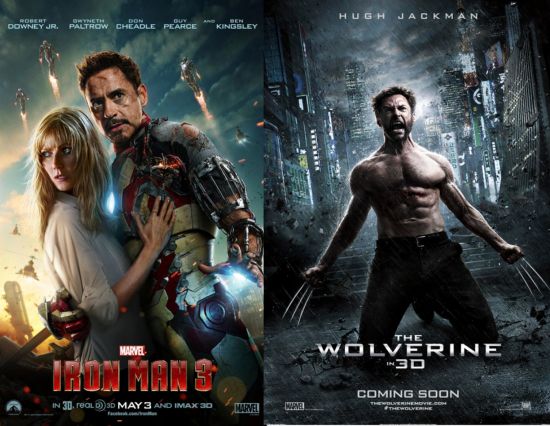 has published their list of the biggest movie mistakes of 2013. The movie mistakes are compiled by their users and include such things as magically appearing crash helmets, changing headlights, and misaligned orbits.

Moviemistakes.com's Jon Sandys said, "I never judge a film by its mistakes, as we all make them. The difference is with good movies I don't mind, whereas with the bad ones it's more fun to look for as many mistakes as possible, rather than suffer through the plot."

Here are the Top 10 Movie Mistakes of 2013, which include mistakes from two superhero films.

1. Gravity - The shuttle's original mission was to service Hubble, yet when the shuttle is wrecked, Kowalsky moves with Stone to the ISS, which just happens to be "a short hike away." Hubble orbits at an altitude of 350 miles/560km, while the ISS does so at an altitude of about 250 miles/410km. Furthermore, even if they had been able to see the ISS from Hubble's orbit, they would have only seen it speed ahead, as their orbital velocities are very different: 7.66km per second for the ISS and 7.5km per second for Hubble.

2. A Good Day to Die Hard - In the car chase, the blue van is hit and the left side headlight dislodges and is dangling down for most of the chase. But in one far shot where the van is taking a turn, it is suddenly switched to the right headlight that's dangling.

3. The Hangover Part III - Chow is carrying around $21 million in gold bullion. A bar weighs 400 ounces. Gold prices at that time were around $1,200 per ounce, and he's got two bags, therefore he's supposedly carrying 8,750 ounces, or about 550lb, on each arm.

5. Now You See Me - The agents arrive at the Four Horsemen's apartment to arrest them. In the shot where Dylan exits the car, the reflection of the boom mic is visible in the other car's window.

7. The Wolverine - The bombing altitude for Nagasaki was 30,000 feet, but in the opening scene the planes bombing Nagasaki are a lot lower than that. The bomb also detonated at 1,500 feet, not at ground level as shown.

8. Fast and Furious 6 - During the runway scene, Shaw's vehicle is seen fitted with HID type headlights (bluish tinge). Yet during the sweeping wide angle shots and when Shaw drives into the cargo plane, the lights are a standard yellow.

9. World War Z - When the family's car is about to be hit by the ambulance as they try to escape downtown, Gerry is driving and his wife is up, leaning over the passenger seat talking to their daughter. The camera angle changes to a view from behind, and as the ambulance is about to hit, we can see there is nobody in the car and the ambulance driver is wearing a safety helmet.

10. Gangster Squad - In a scene where the nightclub singer with the tropical fruit headwear is on stage, she is singing into a classic RCA 77D microphone which is correct for the period, but in a mistake often made in movies that are set in this era, the microphone is wrongly positioned. It is leaning toward the singer when in fact this type of mic is spoken to from the side, not the end. To work correctly it was always pointed away from the singer or placed in a vertical position for side pickup.

See more of the best movie mistakes at https://www.moviemistakes.com/best2013