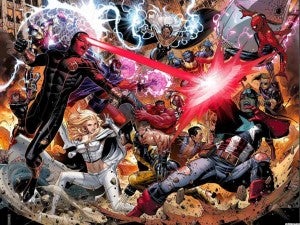 Late last year, DC Comics's New 52 relaunch was the talk of the comics industry, selling out DC's entire superhero line and sending all 52 of the #1 issues back for (at least) second printings. These days, Bleeding Cool is persistently reporting rumors of a similarly-ambitious Marvel relaunch spinning out of Avengers Vs. X-Men and while Marvel editorial had previously mocked DC's efforts and promised not to do the same, the financial success of the New 52 is undeniable and in addition to that, there are a number of reasons why Marvel might be interested in a relaunch of their own. One More Day While the idea of One More Day was to set a new status quo for Spider-Man that was more comfortable and accessible for new fans and casual readers, and it's arguable that they succeeded, they also alienated many longtime fans and irreparably damaged the character in the eyes of some. The "deal with the devil" at the heart of the story builds a pretty untenable little bit of history into Peter's life story and a relaunch would allow Marvel to keep the young, hip, single Spider-Man they wanted without the need to retain the continuity and character damage of this contrived and controversial story. Civil War Speaking of character damage--at least One More Day reserved it to one character and seemed to have an obvious and generally positive end goal in mind. With Civil War, Marvel did some serious damage to Tony Stark's character just in time to roll out a series of massively successful Iron Man movies. Timelines The bane of any ongoing comics reader who has spent far too much time wondering whether Frank Castle served in Korea, Vietnam or Desert Storm, timelines are always going to be a problem for Captain America, but most other characters would benefit from simplifying the timeline and reducing the number of moving parts that have to be crammed into what "counts." The Age of Apocalypse Whereas not long ago, the only alternate universe getting any substantial play in the Marvel multiverse was the Ultimate Universe, complete with its own line of tweaked-continuity comics, the advent of a new Age of Apocalypse monthly coming in March opens the door to the kind of universe-wide tinkering that we saw Pandora doing at the end of Flashpoint. An unsustainable event cycle Ever since Civil War, Marvel has had an ongoing series of interconnected events that have been generating diminishing returns in terms of sales and critical response--but it's the cycle they're stuck in now, it seems. It's also incredibly insular and makes it more difficult for those mythical readers finding cheap digital comics after their viewing of Avengers to find purchase in a Marvel Universe where there always seems to be a dozen interconnected and often-incomprehensible plot threads. Story synch What will make it a little easier for new readers to find their way in? Synching up the continuity--or at least some of the events, costumes and the like--between either the Marvel cinematic universe or the Disney XD Marvel programming block. Going all the way back to changing the Bat titles to accommodate the Adam West series, comics have seen the benefits of having the different versions of their characters be as compatible as possible. Setting their own priorities Comics publishers at this point are beholden to anal-retentive fans and decades of continuity; setting their own priorities and their own ground rules had to be one of the best parts of the New 52 for DC writers and editors, and you can be sure that Marvel sees the appeal of clearing the board and cleaning up complicated or unpleasant continuities for characters like Spider-Man and Jean Grey. Sales As we discussed in another article today, sales in the comics industry are low and sinking. As the reader base gets older and sales sink, something has to give. If it's a change in the way publishers do business, that will have to be a longer plan. Changing the way they tell stories is, relatively speaking, quick and easy. Ego After years of being the undisputed kings of comics, Marvel  have been getting trounced by DC in both sales and critical reception lately and it bothers them. If you want proof, just read any of the many interviews that Marvel's editorial and business types have been doing with CBR since the New 52 announcement and read the mass of rationalizations and verbal acrobatics used to prove that DC isn't REALLY outperforming Marvel, not that we would care if they were. Because they can. From a story point-of-view, the Phoenix Force is one of those powerful and ill-explained concepts in the Marvel Universe that can be used to do more or less anything you want it to. In this case, a relaunch seems appealing and the space/time-warping nature of the Phoenix Force can make it happen. That isn't to say it will, but if they were going to do it anyway, dropping it into the middle of a big event where it makes some degree of story sense (a la DC's Flashpoint) is the best way about it.

Dark Side of the Ring: Why Evan Husney and Jason Eisener Made a Plane Ride From Hell Episode