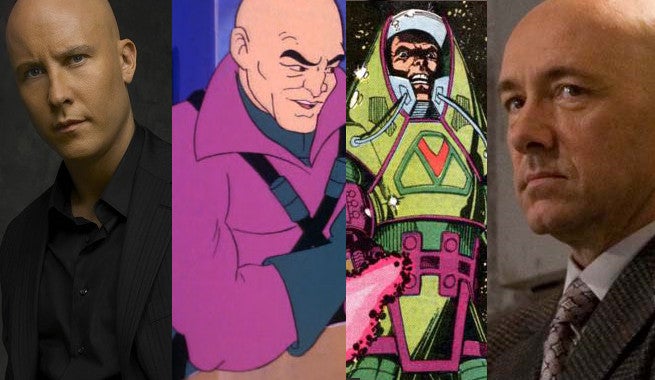 In case you're just now joining us, Jesse Eisenberg's official look for Lex Luthor in the upcoming Batman v Superman: Dawn of Justice was released this morning.

Fans have been wondering if Eisenberg will keep his natural curly hair for the production or if they were going for full dome with Lex's first appearance here. His stoic, dead stare is perfect for Lex, and since they're making Lex one of Clark/Superman's contemporaries, instead of aging him, we'd like to take this moment to take a look back at some of Luthor's more memorable looks through the ages. 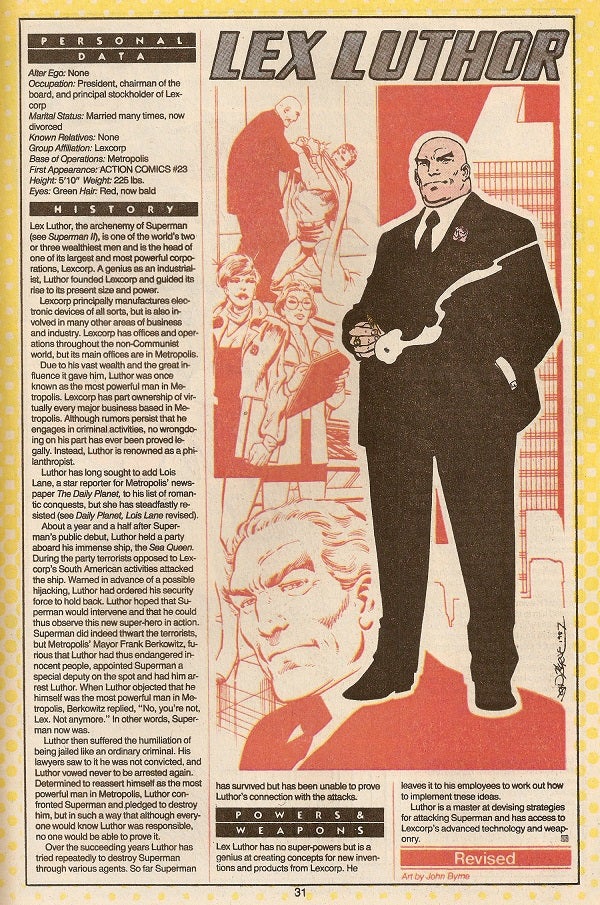 Imagine if Ronald Reagan had a raging hatred for Santa Claus. That's what you have here. Before John Bryne's redesign of Lex for 1986's Man of Steel, Lex Luthor was seen as a mad scientist sort of character, plotting the entrapment of Superman with strange, scientific devices. With the dawn of the 1980's and the ultimate idea of super villainy coming from icons like Gordon Gekko from Wall Street, Luthor was now the embodiment of corporate greed and now uses his Lexcorp company to fund his still weird and destructive technology that only has one goal: to put an end to Superman. 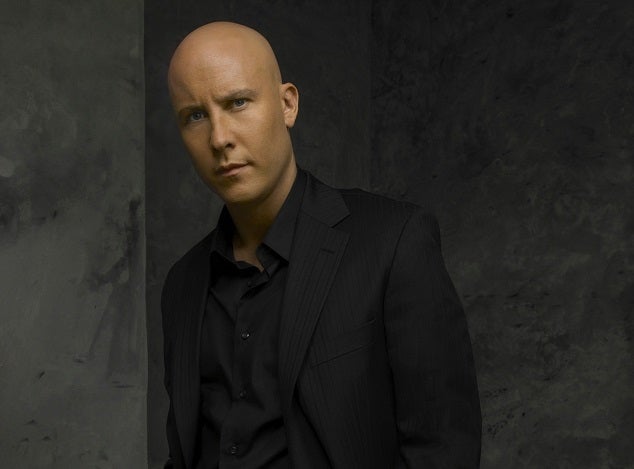 "I am the villain of this story!"

While Hollywood was trying to get Superman off the ground in the early 2000's, there was Michael Rosenbaum stealing the show on TV's Smallville. True, you did the have the Superman animated series with its own Lex, voiced by the downright incredible Clancy Brown, but that show failed to show the many layers of Lex that Smallville was exploring every week. Taking a page out of the Silver Age where Lex and Superboy were friends before a horrible accident took Lex's hair, and sanity apparently, Smallville examined Clark and Lex's relationship in length as well as how troubled Lex really was.

3. Challenge of the Super Friends 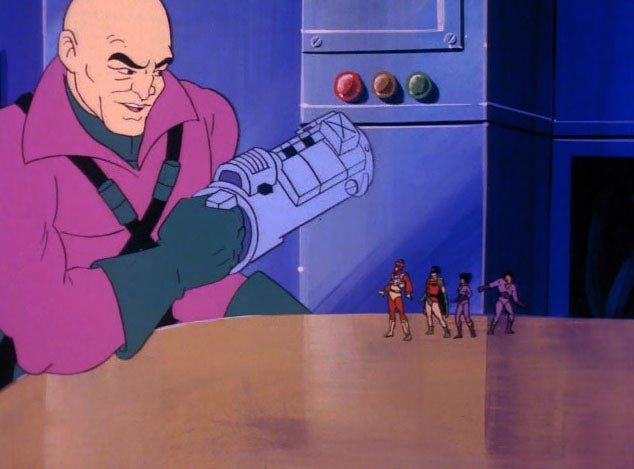 For most of the 70's, this was Lex Luthor. A person of almost meta intelligence so smart he could time travel, make shrink rays, go into other dimensions, shapeshift, you name it. What does he do, though? Concentrate all that energy by teaming up with a bunch of incompetent B-listers that just want to rule the world. And you know, kill the Super Friends. This Lex was more of a throwback to the 40's with the mad scientist motif, but with an updated more "evil" outfit. There are very few people who can pull off that military green and fuchsia combination, so he has at least that going for him. 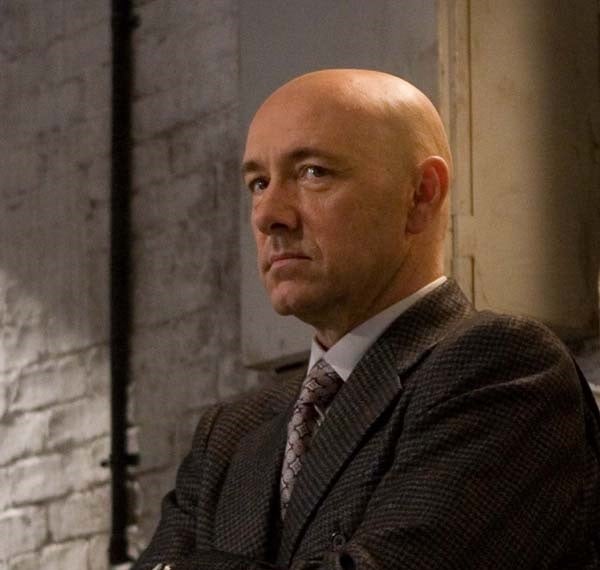 "Gods are selfish beings who fly around in little red capes and don't share their power with mankind."

Even going back to 1997 with Tim Burton's Superman Lives, it seems Kevin Spacey was always in the running to play Lex Luthor. The two-time Oscar winner finally got the chance to play Luthor in Bryan Singer's Superman Returns which was supposed to act as a relaunching point for WB's Superman franchise. Of course, we know how that played out and Spacey is just a small footnote in the history of the character, but he brought to Luthor the menace, the iciness, and the ruthless aggression that was lacking on the big screen. Problem was, his shtick was the exact same thing as Gene Hackman's Luthor bit from the Richard Donner Superman film having an obsession with really bad real estate ventures. What could have been... 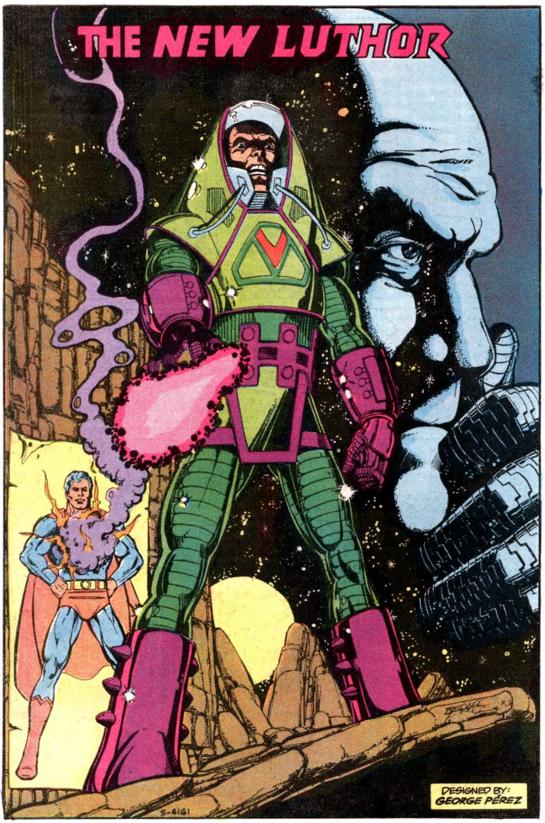 As the expression goes, the suit makes the man.

Taking color cues from the look from Super Friends, Lex suited himself up with a powerful suit of armor, commonly called the "powersuit" giving him firepower as well as durability to take a few hits from the Man of Steel. The suit has seen many incarnations since its introduction in the 80's and featured in animated series, video games, but yet to have made a live action debut. Could this be something to see in Man of Steel 2 down the line?

All he wants is a bailout.

So, readers, what are some of your favorite looks of Lex over the years? Let us know in the comments!