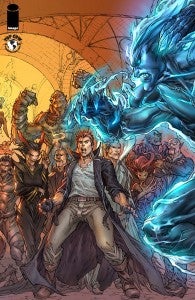 Sometimes the movie buff in me pushes the comic book side out of the way. And that's exactly the case with Top Cow's upcoming series 'EPOCH: The Greatest Tournament Ever.' With a premise so incredibly cool, I want them to skip the comic book and go straight to the silver screen.

EPOCH, a 5 part miniseries, centers on NYPD Detective Jonah Wright, who while investigating a murder, gets pulled into the world of the supernatural. This new world features a tournament that pits one supernatural creature against another.

'EPOCH meets all of my criteria for a cool comic: murder, mayhem, mythology, mystery, and monsters. And a hero that dresses like Ming the Merciless,' explains writer Kevin McCarthy. 'EPOCH is the kind of comic I'd want to buy. Where else can you see an angel with inner demons solve the murder of a werewolf, pistol-whip a wizard, and run game on a gorgon?'

Sounds pretty fun to me. Written by McCarthy and illustrated by Paolo Pantalena, 'EPOCH: The Greatest Tournament Ever', hits shelves August 3rd.