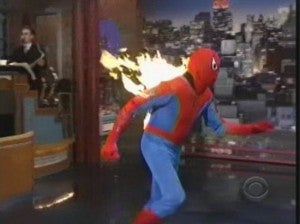 It was just a superhero kind of night on the Late Show with David Letterman that aired on Tuesday, June 14, 2011. In addition to Ryan Reynolds appearing to promote the upcoming Green Lantern movie, the Late Show also featured an appearance by a blazing Spider-Man. David Letterman made several cracks about the Spider-Man broadway show, which prompted a costumed Spider-Man on fire to run out onto the stage. Letterman also featured Spider-Man as the subject of his top ten list.