He’s been name-checked in movies as diverse as “Easy Rider” and “Men In Black,” and called out in Gun N’ Roses song “Paradise City.” At Wrestlemania 26 this year, Superstar Rey Mysterio came to battle clad in his costume. Right now he’s being primed as Marvel’s next multi-media star with his forthcoming movie “Captain America – First Avenger.” Captain America has been this country’s defender since bursting into comics in 1939, and since then he’s been a shining example of all that is good about the American Dream. Here’s some of his most inspirational moments:

The first issue of Mark Waid’s first run on Cap didn’t even have our hero in it until the very last page. The Avengers are called to a hostage situation at the Jefferson Memorial in which armored terrorists have kidnapped the President. The only thing they want? Captain America. The problem? The Avenger think he’s dead! Sucks to be the POTUS. The lead agent vents his frustrations out on the absent Captain, causing Hercules to set him straight. 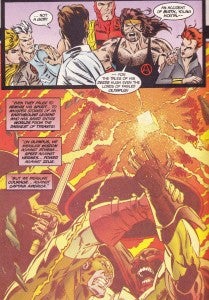 09. Selfless To the End - After the Civil War pitting Captain America and his outlaw heroes against Iron Man and his government employed super army, Cap was being put on trial. On his way to the courthouse, being villified and slandered, he steps in the way of a sniper’s bullet to save a US Marshal. Then he’s shot point blank in the ensuing chaos. His last words were asking if the crowd, the people throwing tomatoes at him, were safe. 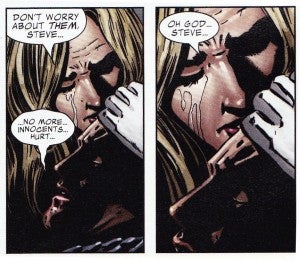 08. Represents America, Not the Government -

The high point of Mark Gruenwald’s long run on Cap was the story that saw Steve Rogers give up his super-hero identity. A government agency started tightening the reins on him and wanted him to work exclusively under them. He would report solely to them and perform missions at their behest in what they considered to be the best interests of the country. Cap refused to compromise his belief that he represented all America, not just some faceless government group, so he gave up his costume and name and walked out on Uncle Sam. 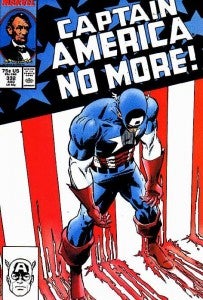 During Daredevil’s “Born Again” saga, Kingpin unleashed the drug-addled super-soldier Nuke in Hell’s Kitchen hoping to draw DD out of hiding. The battle destroyed much of the Kitchen, drawing out the Avengers. Cap, while saving a young girl, orders Thor to bring the rain. Without hesitation or comment, the thunder god does. 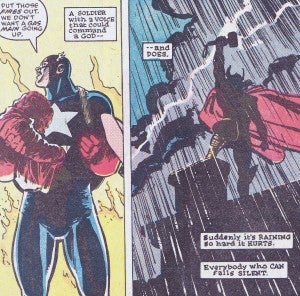 A stereotype of Captain America is he likes to make with the speechifying. During Civil War, Spider-Man’s convictions had lead him to abandon the security of Iron Man’s side to become an outlaw on Cap’s side. Having doubts, Spidey turns to Cap, and Cap gives one of his best speeches to an audience of one. How does Cap continue to stand up for what he believes if so many are against him? After quoting Mark Twain on patriotism, he makes it clear. 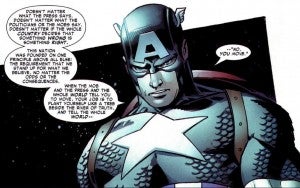 One of his most famous moments, and sure to pop up in the “Avengers” movie next year, Cap gets defrosted from his long sleep. After the Avengers find his body and bring him aboard their ship, he awakens still reeling from the horror of watching his sidekick Bucky die. Does he freak out? No, he clotheslines the hell out of Thor, Iron Man, and Giant Man instead. 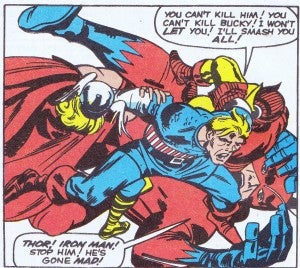 Just to emphasize how amazing Cap is, presenting Thor’s hammer. Only the “worthy” can heft this god-weapon, and only the worthy have been gods. He can already command Thor, and he’s a measurement of bravery on Olympus. On the road as the Captain after giving up his identity to the government, Steve proves his divine mettle and swings mighty Mjolnir, a feat rarely accomplished. Hell, even Superman had trouble with it. 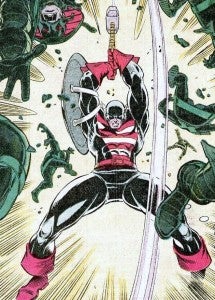 In “Infinity Gauntlet,” mad space-villain Thanos gathered the Infinity Gems and became omnipotent. Then he killed half the universe as a gesture of love to the embodiment of Death. An army of super-heroes took the fight to him and failed miserable. Thanos killed damn near all of them. Cap was left standing, walks right up to Thanos, and says, “You’ll never be able to claim victory.”

“Maximum Carnage” stands as one of the most violent and dark Spider-Man stories ever told. Carnage and his crew of nutballs have torn through New York slaughtering people for the sake of just simply doing so. Falling to desperation, Spidey allows Venom’s morality into his conscience and orders teen heroine Firestar to bake Carnage alive. Realizing how far he’d sunk allowing an innocent girl to murder a man, even one as evil as Carnage, Spidey relents and calls her off. Badly beaten by Venom as a result, Spidey crawls on the ground succumbing to the horror. Then he looks up to an outstretched hand. Cap, with the moon behind him like a halo, has come to bring hope at last. 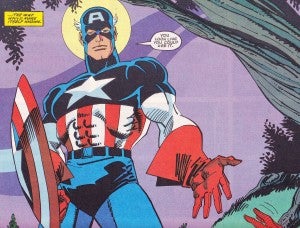 In 1939 America hadn’t even entered the great war raging in Europe. Sure, Hitler wasn’t liked here, but America was still technically neutral. Not Captain “By God” America. His first appearance ever, Cap dives through Nazi gunfire and punched that sumbitch Hitler right in the mouth. Has there ever been a greater debut for anybody ever in the history of awesome? Don’t try answering, it’s no. 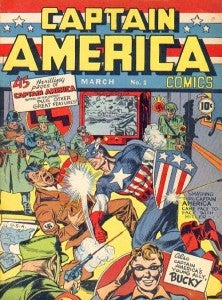