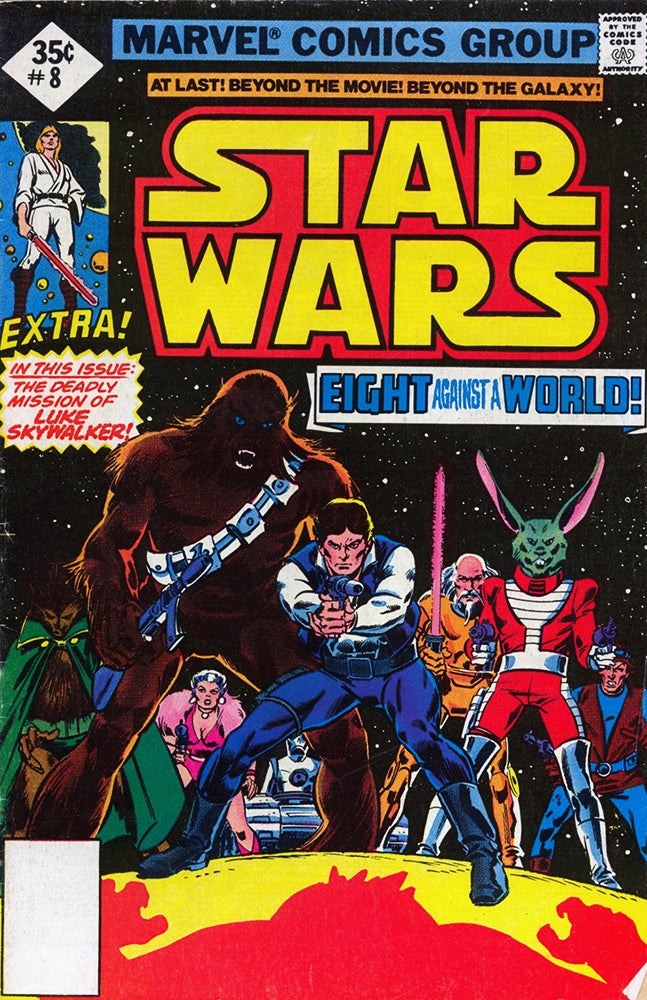 Here it is, the issue you've been waiting for—even if you didn't know you were waiting for it.

After reading "Star Wars" #8 for the third time in recent memory, I have to say that this issue feels much more in line with the tone set up in "Star Wars"—even if it does go completely off the rails. In some ways, this issue is even nuttier than the last one. I mean, just look at the lineup on the cover! A hedgehog in a cloak! A lady spacer that looks like an Eva Gabor/Barbarella mash-up! A giant, green, space bunny! This one's gonna be weird.

But first we have to deal with the previous issue's cliffhanger, which left Han Solo with a dangerous job offer from some regrettably racist characters. The first page of this issue dives heavily into damage control territory. 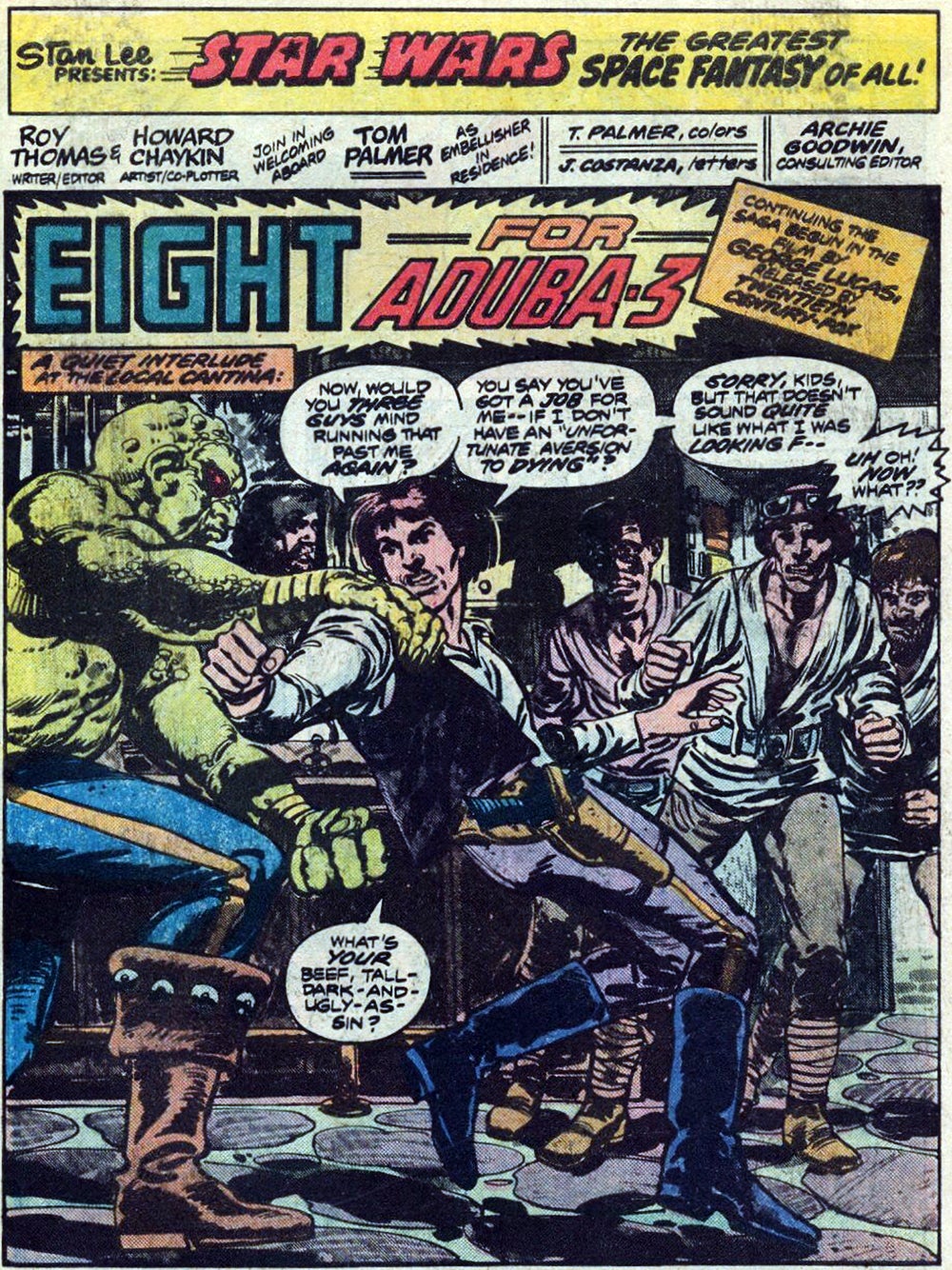 The farmers have undergone a makeover that makes them look like relatives of the most prominent farmer we've seen in the Star Wars universe—Luke Skywalker. The issue immediately pulls attention away from the jarring redesign by introducing a giant reptilian-looking bruiser that's looking to fight Han. I really enjoyed reading this distraction, because a bar fight is much more "Star Wars"-y than last issue's ritualistic burial plotline and anti-prejudice message. Call me old fashioned, but I just want to see Han break a chair over a drunk alien's head.

Han gets a helping hand when Chewbacca reenters the cantina after two pages of fighting. 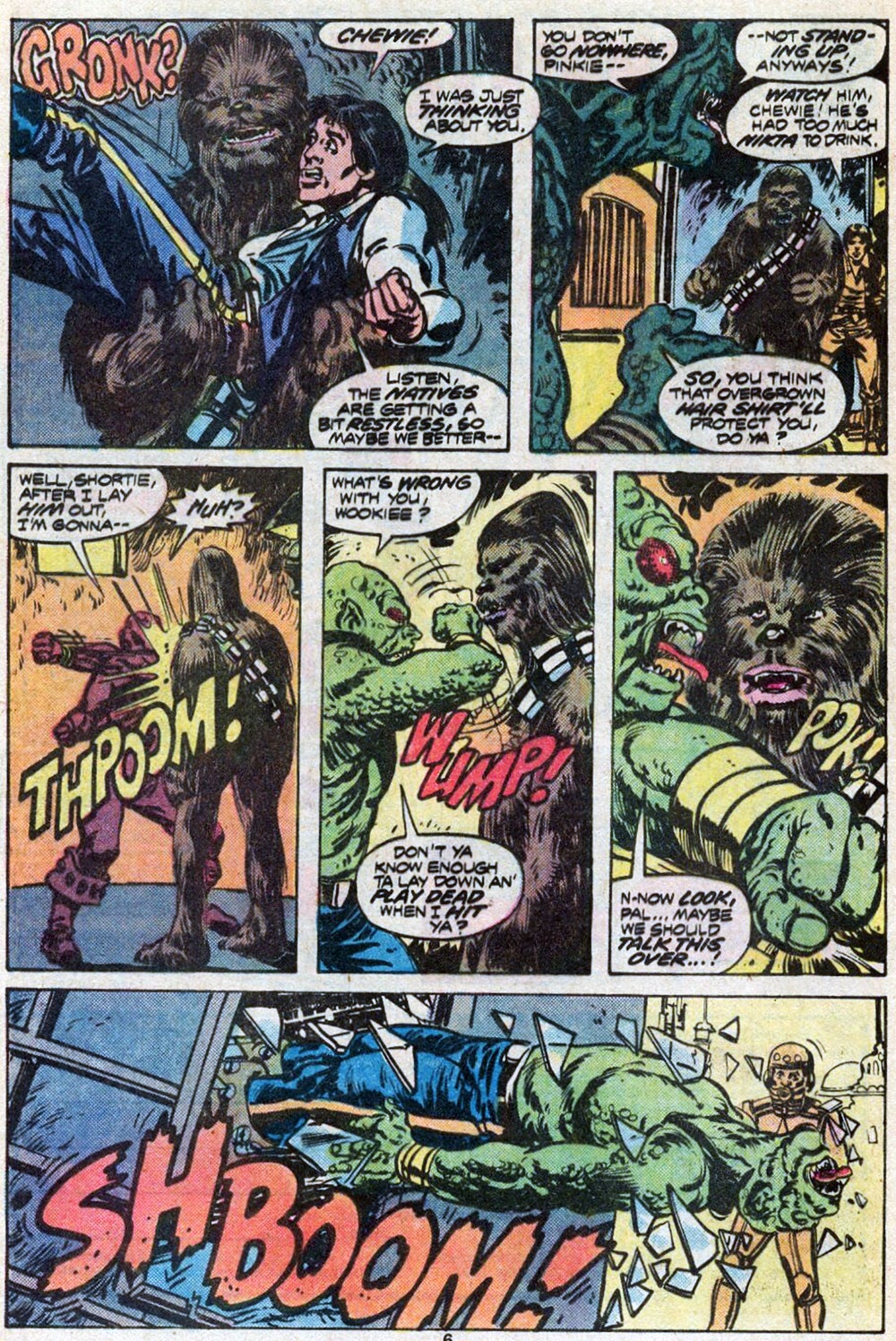 This might have something to do with new inker Tom Palmer, but this is the best Chewie has looked in the series. I mean, he doesn't have a mustache on his furry face like he did a few issues ago, but he looks great here without it. I really love the first panel on the page where Chewbacca catches Han. That's a total bro moment for these two, and this series could use a lot more of those. This is also one of the first times where we actually get to see just how tough the Wookiee is—even if it's just implied by the lizard guy getting punched through a window.

With the seemingly gratuitous bar fight out of the way, the farmers continue to present Han with their sales pitch. Their simple village has been getting swindled, robbed, and ransacked by a group of outlaws called the Cloud-Riders on a yearly basis. The Cloud-Riders are not, as their name implies, cuddly characters from an early '80s all-ages Saturday morning cartoon show. They are, however, led by cartoonist Sergio Aragonés. No joke. 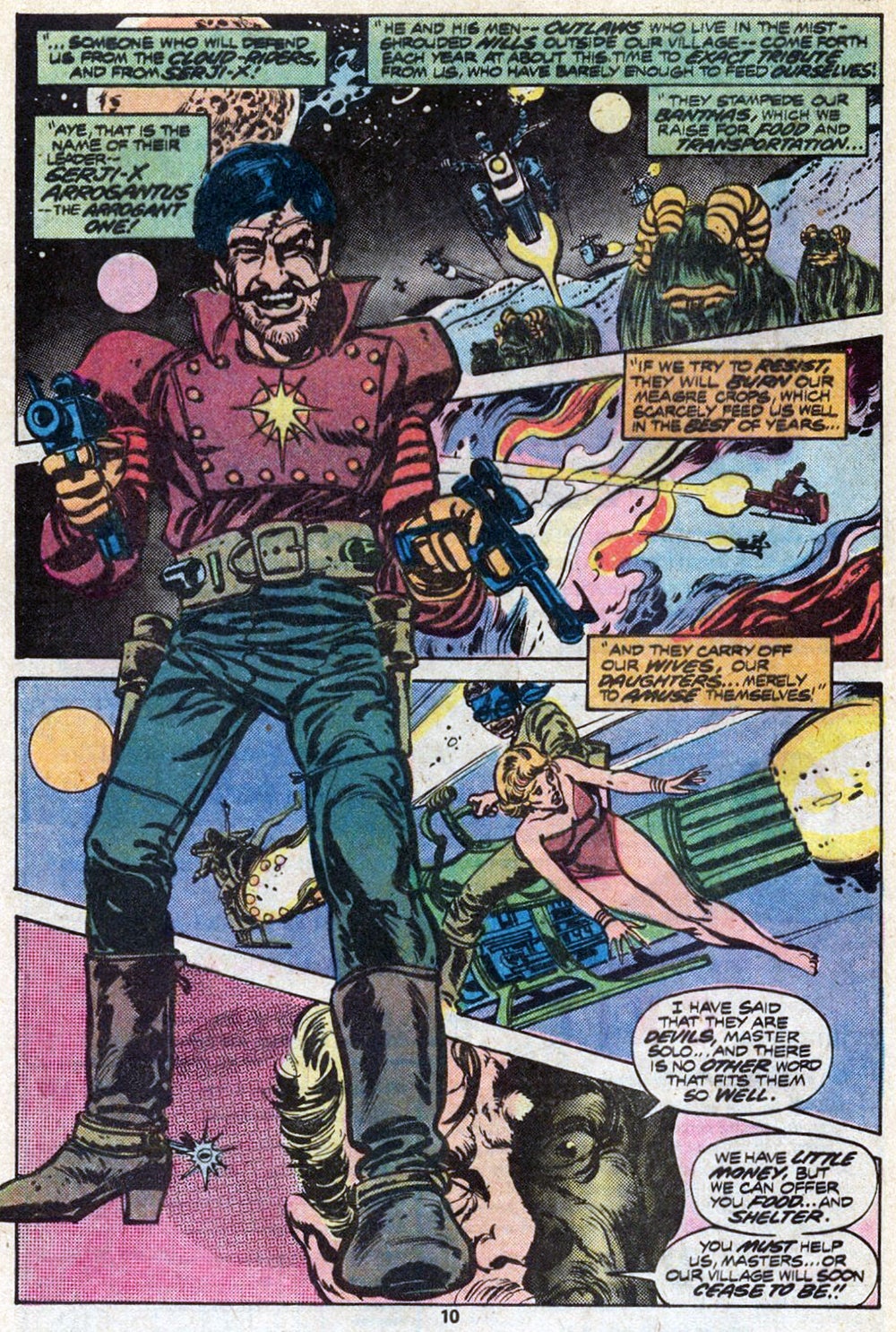 Come on, there's no way that Serji-X Arrogantus is not Roy Thomas and Howard Chaykin's tongue in cheek shout out to "Groo" creator Sergio Aragonés. Just Google "Sergio Aragonés 70s" and marvel at the similarities. Same mustache, you guys, same mustache.

Anyway, Han and Chewie take the job defending the no-longer-racist farmers form Sergio Aragonés, but first Han decides to recruit a team of "down-on-their-luck spacers" to help fill out the ranks. Naturally, Han holds try-outs for his anti-Cloud-Riders squad in his quarters while sitting shirtless on his bed. 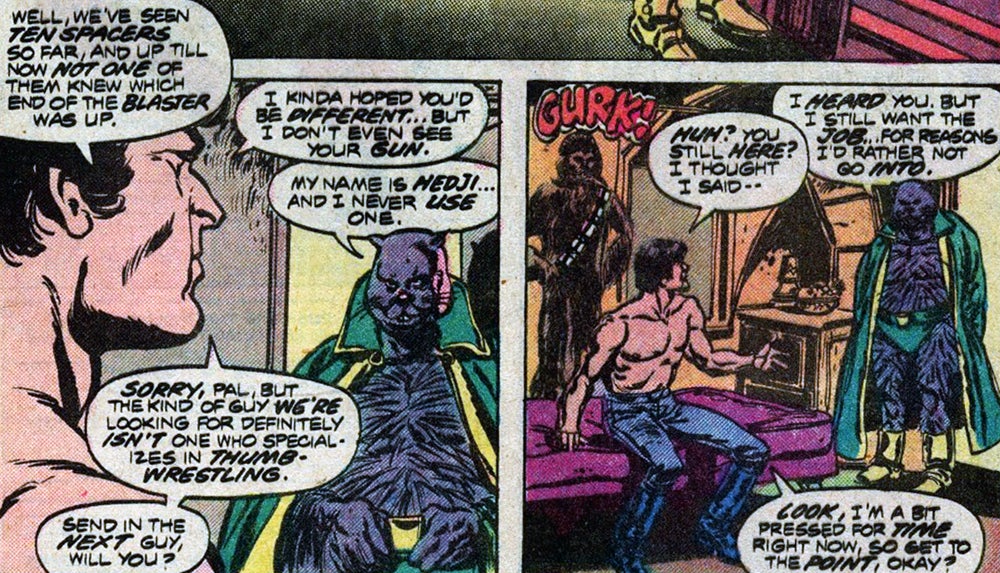 The shirtless Solo interviews Hedji, the last "spiner" in the galaxy, who can shoot quills off his body with deadly accuracy. He also looks like a forgotten "Teenage Mutant Ninja Turtle" character, one whose action figure kept a lot of toy aisle pegs warm alongside Ace Duck and Wingnut. 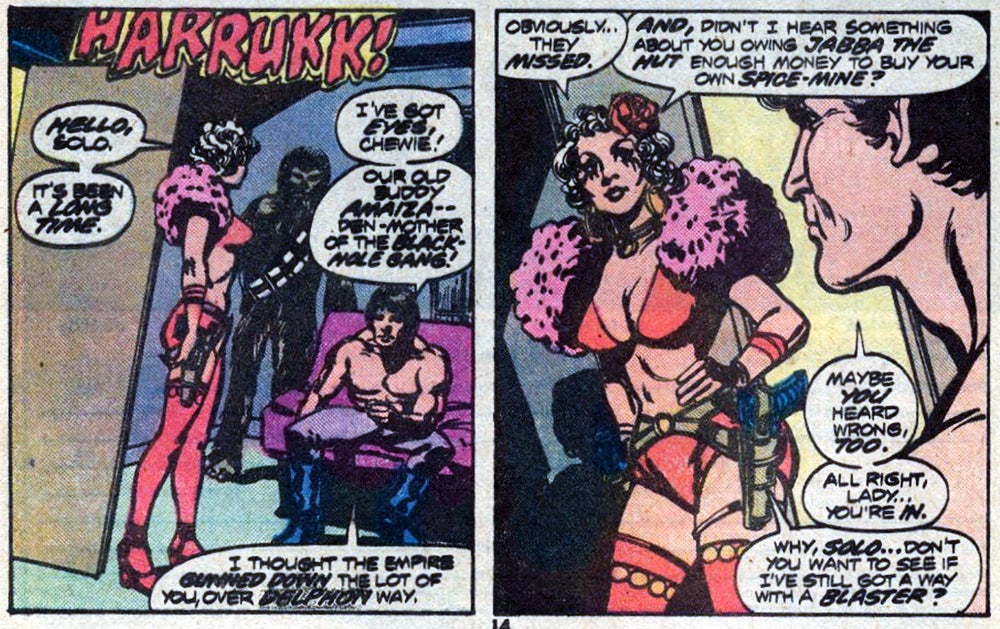 Katy Perry meets Captain Jack Sparrow. Lady Gaga in Fraggle Rock cosplay. Sexy Candy Land Halloween costume. I can't stop—and I haven't even gotten to her name yet. Amaiza Foxtrain? That's almost Bond girl level bonkers. Still, props where they're due; Ms. Foxtrain has a reputation that impresses Han immediately, she survived getting gunned down by the Empire "over Delphon Way," and knows how to use a double entendre. She's a ridiculous looking character with a mouthful of a name, but I'm on board.

Then we meet Han's third recruit, a crazy old kook and "Jedi Knight" named…Don-Wan Kihotay. Don Juan, Don Quixote…Don-Wan Kihotay. Get it? The name sounds more like a "Spaceballs"-esque dig at Obi-Wan Kenobi than an actual character. We pick on Jaxxon the green rabbit all the time, but isn't this a tad bit more ridiculous? Just remember this guy the next time you trash Jax. 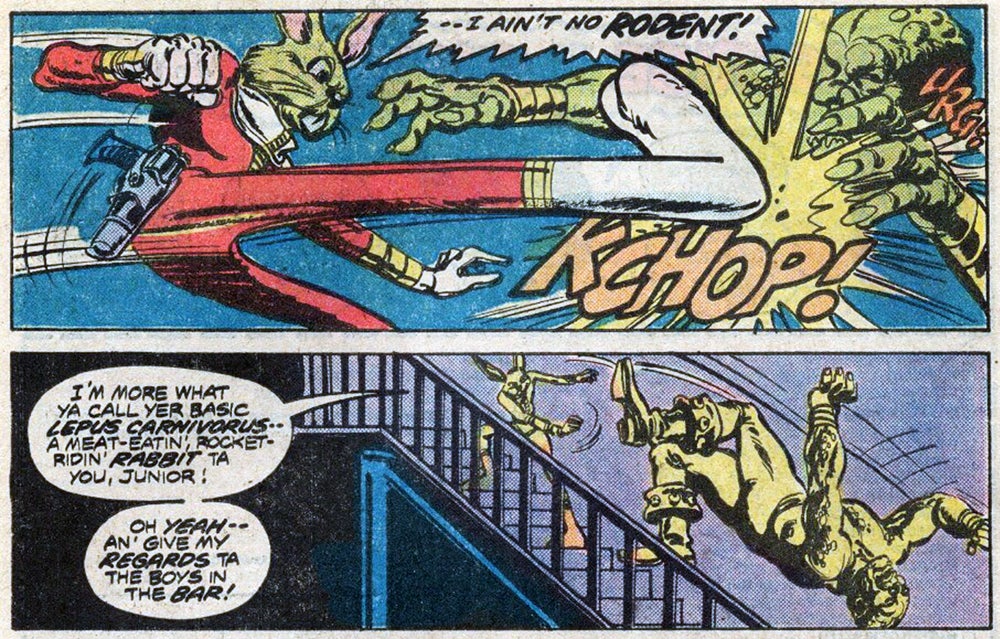 The Lepus Carnivorus first appears when the lizard alien from the cantina tries to cut line and audition for Han's group. Jaxxon gives him a big wallop to the face with his rabbit foot.

So…what's the deal with Jaxxon? As a super tall—and super green—"meat-eatin', rocket-ridin' rabbit," the guy kinda embodies everything that is gleefully strange about the Marvel Comics. It's no wonder "Jaxxon" has become shorthand for, "Trust me, the Marvel Comics were crazy—like crazy crazy" in Star Wars fan circles. His existence, the Latin name, and the fact that he is undoubtedly a rabbit, completely contradicts the alien universe set up in "Star Wars." But after meeting Hedji, Amaiza Foxtrain, and Don-Wan Kihotay, Jaxxon barely warrants a second glance. Things were already plenty weird before he arrived. Jaxxon's not even the only green bunny blasting through outer space; Wikipedia says that writer Larry Hama created Bucky O'Hare, another gun-toting green space rabbit, sometime around 1978 or 1979. I'm pretty sure that I thought Jaxxon was Bucky O'Hare when I first picked up these comics in the early '90s.

After Jaxxon signs up, we meet Jimm, the Starkiller Kid, and his droid FE-9Q—or Effie. Jimm's a blatant stand-in for Luke Skywalker, if that wasn't evident by his use of Luke's original surname. The similarities even lead the still shirtless Han to think about his ol' pal Luke. The story cuts to Yavin-4 where Luke and the droids board a tiny Corellian corvette in search of a new Rebel HQ. This leads to a pretty great looking mid-issue recap page from Chaykin and Palmer. 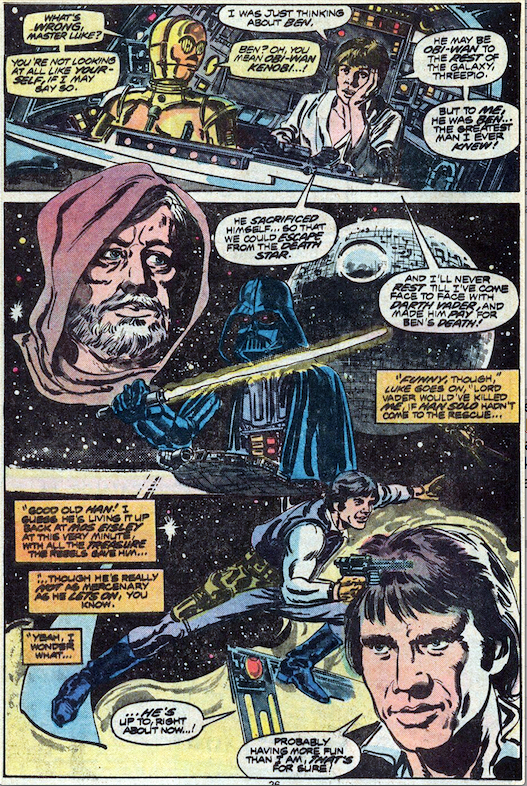 Han and Luke wonder what each other are up to right at that moment, which makes my brain start playing "Somewhere Out There" from "An American Tail"—although Han and Luke have a lot more bright stars to look at than Fievel and Tanya ever did.

The ragtag band of eight gathered at dawn—and saw for the first time what Han looks like with a shirt on. 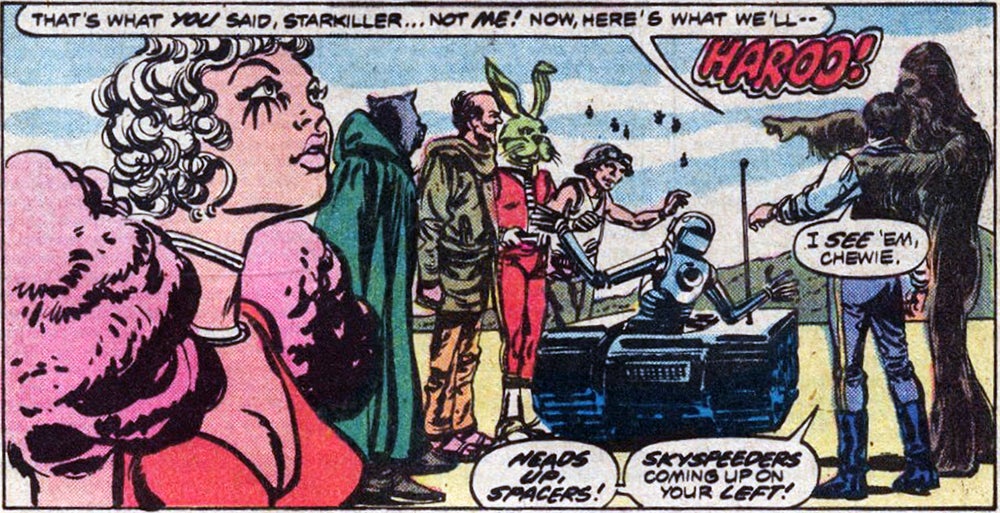 While flying to the poor farming village, Serji-X and his Cloud-Riders make a pit stop to torment the recently chosen champions. Yep, old lizard jerk joined up with Serji-X and alerted the Cloud-Riders to the newly formed team. See, the fight at the beginning of the issue wasn't gratuitous! Han's crew made a bad impression when Starkiller prematurely pulled a blaster on the leader of the Cloud-Rider. Amaiza had to stop the kid before he got himself killed. 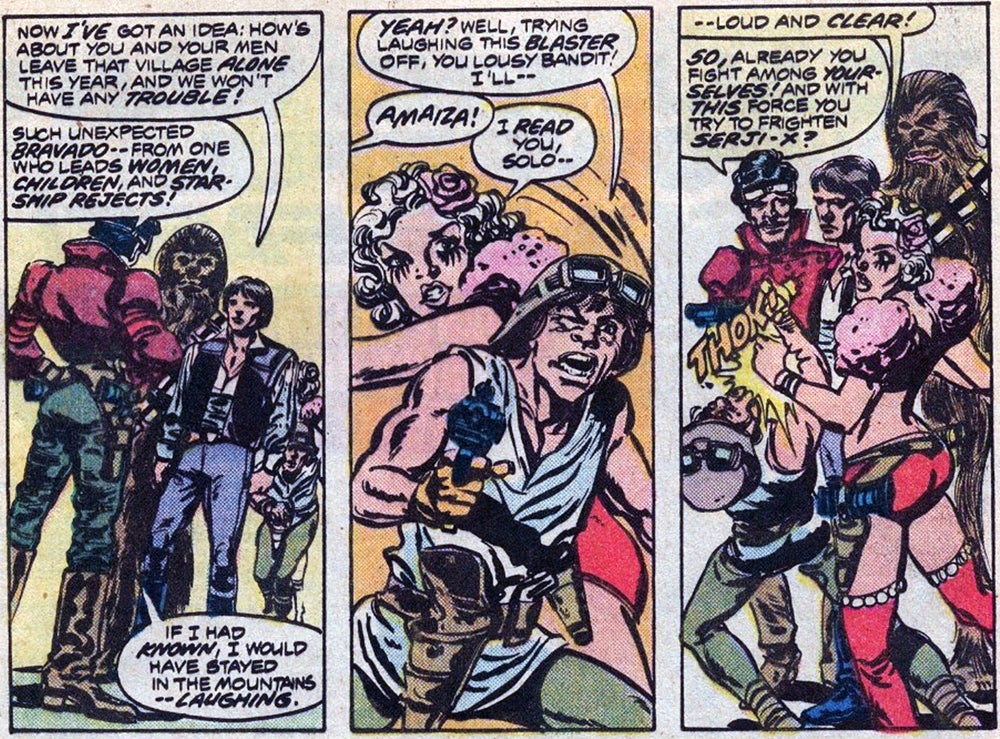 And that's where we leave our misfit bunch of colorful kooks. The Cloud-Riders are on their way to ransack the poor village, and Han's got a teenage sidekick with an itchy trigger finger.

NEXT: "Showdown On A Wasteland World!"