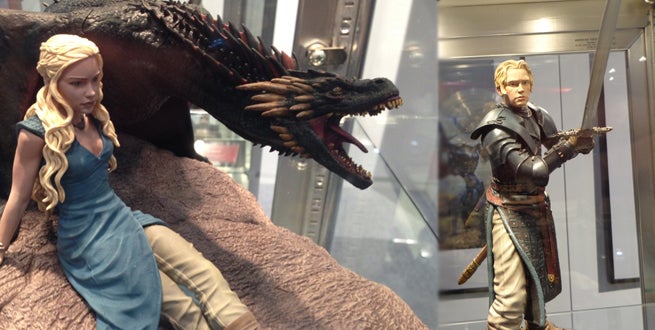 The casual comic book fan may not know that Dark Horse also makes accessories and collectibles. The casual collector may not realize those awesome Game of Thrones figures are from a comic book publisher. Nonetheless, the company brought an assortment of recent and upcoming releases to Toy Fair 2015, include two statues that bring them firmly into the premium market.

After the successful releases of Arya Stark and Tyrion Lannister statues, the next featured character is Brienne of Tarth. In a towering statue appropriate to her real-life imposing stature, the details are impressive - at least until you take a look at their deluxe Daenerys and Drogon statue.

The sculpt on this can't be done justice in pictures, capturing the Mother of Dragons' pensive stare as she considers her next move. The fiercest of her dragon children is caught bellowing, mid-roar and fiercely telling the world of this queen's impending return. The statue's price may make you bellow, at $425, but be warned, Game of Thrones fans, there will probably be a huge (see 200%-300%) uptick in the price when it goes aftermarket. That will be due largely to the fact that they're only producing the statues based on orders, so it will be extremely limited edition.

The map and map markers were also on display, but Game of Thrones wasn't the only thing there.

Criminal Macabre's Cal McDonald gets a statue, and the first edition will actually include wings that were "so big [they] couldn't bring them to the show - they wouldn't fit in the case!" The Goon also gets a new full-color statue that was originally made as a kickstarter exclusive bonus. That edition was just the basic printing of the statue, not the colored/painted version here. As a Dark Horse rep told me, "We had the mold of this, and we realized we'd be just idiots not to sell it!"

A new Frazetta set of art playing cards and a Death Dealer snow globe were shown off for the first time in person, as well. Two new Zelda figures not made by Dark Horse join their lineup in North America, as they distribute the previously only-found-in-Europe figures here.

Take a look at the full gallery below, and start saving those pennies (and contacting your retailer) for that Daenerys and Drogon statue!