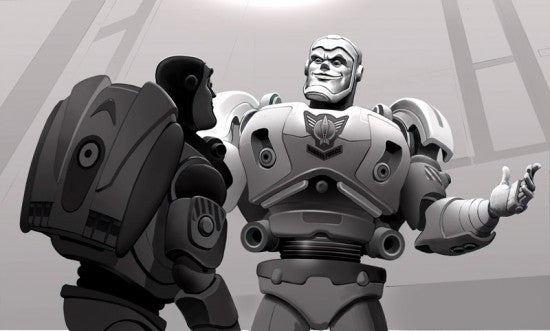 A look at some concept art for Pixar's Toy Story 3 currently circulating at Slashfilm reveals that the movie could have been a very different film than it turned out to be.

Conceived about a decade ago when Disney was having relationship troubles with Pixar, this version of Toy Story 3 that would have seen Buzz Lightyear recalled to Taiwan and Woody and the gang traveling across the world to save him.

The idea at the time was that if Disney and Pixar were to part ways, Disney would retain ownership of the characters used in the Disney/Pixar co-productions, paving the way for the kind of shabby, direct-to-video sequels that Pixar chief John Lasseter has all but eliminated since taking charge of Disney's animation division.

The recall storyline appears it would have been more action-driven, featuring (as seen above) what looks like the bastard child of Buzz Lightyear and Megatron.

You can see the full gallery of images at the link above.