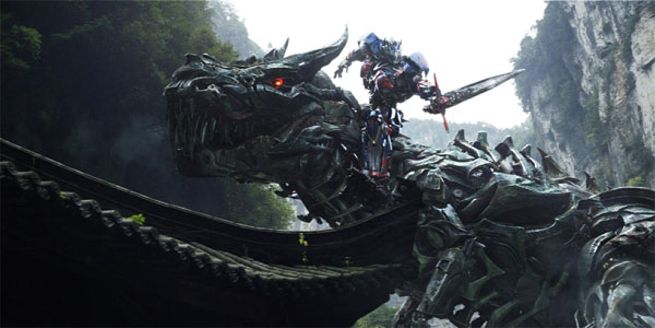 Director Michael Bay returns to helm his fourth franchise installment in Transformers: Age of Extinction. The film plants the seeds for a new trilogy of Transformers films, but, after sitting through nearly three hours of Bay's signature, bombastic style, it's unclear why that should be considered a good thing.

The film begins with Optimus Prime (voiced once more by Peter Cullen) and the Autobots on the run following the Battle of Chicago. A Transformer bounty hunter named Lockdown (voiced by Mark Ryan) is helping a government black ops agent named James Savoy (Titus Welliver) hunt down the Autobots at the behest of Harold Attinger (Kelsey Grammer), a high-ranking government official.

While wounded and in hiding, Optimus Prime is discovered by our new cast of human characters. Mark Wahlberg plays Cade Yaeger, a down on his luck inventor whose looking for a big salvage score to help put his daughter, Tessa (Nicola Peltz), through college. The first act of the film is dedicated to introducing us to these characters, as well as Cade's goofy assistant, Lucas (TJ Miller), in a series of aggressively picturesque scenes, in which the characters stand under a starlit sky or an American flag explaining everything about their characters through long bouts of exposition. All this time ham-fistedly drawing out these characters and their backstories feels utterly wasted by the second act, when the humans become little more than inconsequential, fleshy props that occasionally are sent flying through the air or captured by the bad guys.

Things take a turn after Lucas tips off the government to Prime's whereabouts. Instead of showing up on their doorstep with a check in hand, like Lucas expected, Savoy and a sizable contingent of his men arrive, armed and ready to do whatever is necessary to find Prime. 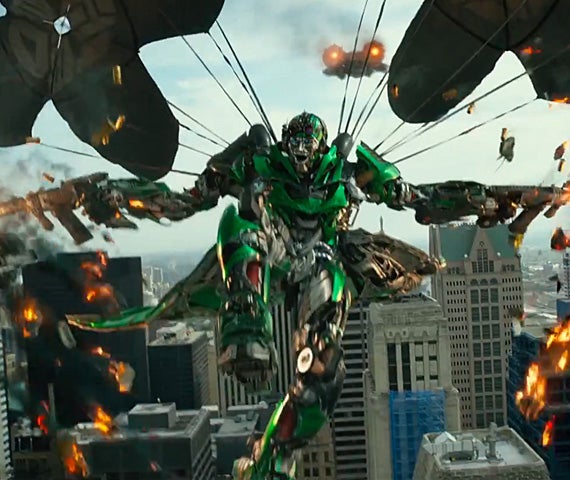 ere, we see how this film differs a bit thematically form the original trilogy. Conceived of during and immediately after the height of American military involvement in the Middle East, the first three Transformers films seemed consistently intent on reveling in glorious military might. Age of Exctinction - conceived of during the era of PRISM and drone warfare – replaces the previous films' heroic soldiers with arrogant, overreaching government officials trying to build a robot army to, at least nominally, keep the world safe without getting anyone's permission to do so. This idea of an abusive government is crystalizes in a scene where Savoy has Cade on the ground at gun point, while Savoy's body blocks out the light of the sun that previously oversaturated his simple, impossibly idyllic Texas lifestyle.

The only human actor who gives a particularly memorable performance is Stanley Tucci. Tucci plays Joshua Joyce, a Steve Jobs-like tech genius. Joyce is learning to reverse engineer transformium, the substance that the transformers are made out of, in order to create his own versions that lack the free will of the originals ad that he can make his own customizations and improvements to. Tucci plays Joyce with a lot of quirk and a surprising amount of conscience. Ehran Kruger's script is no more subtle while dealing with Joyce than while dealing with anything else, but Joyce is still the only character with anything resembling a character arc in the whole film.

Eventually, the Yaeger family, with Tessa's previously secret boyfriend, Shane (Jack Reynor), join Prime as he gathers together the handful of Autobots not already taken out by the government. Bumblebee, a focal point of the previous films, is present but given relatively little to do. The rest of the group includes Hound (John Goodman), Drift (Ken Watanabe) and Crosshairs (John DiMaggio). While the impressive lineup of voice actors do well with what their given, these Autobots are incredibly unlikeable. They're unnecessarily crass in entirely not-charming ways, joyful in violence and even, at times, gleeful at the idea of killing human. At one point Hound shoots a helpless creature in a cage essentially because he can. At one point, even Optimus Prime intently promises to break his previous promise about not killing humans. Rather than putting these characters into a moral grey area following the breaking of the Autobot-human alliance, Bay and Krueger seem to have decided that they're entirely bored with morality and turn the Autobots into reckless, uncaring killing machines. 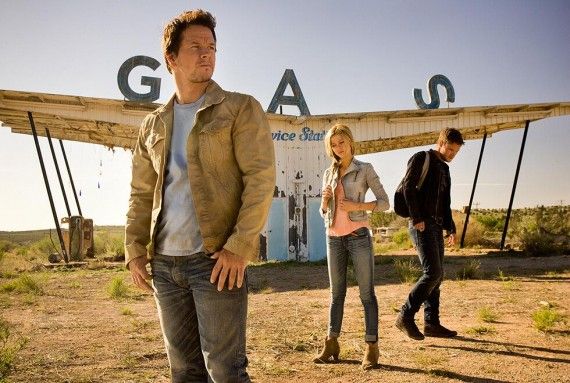 Of course, it wouldn't be Transformers without giant robot battles. Industrial Light and Magic prove, again, that they are capable of incredible things. Yes, the robots themselves are impressively built, but the way they are used by Bay is disappointing, like giving an expensive, handcrafted tool to a novice who's not quite sure how to use it. The robots are so large that they make the frame feel cluttered. When the action happens, it's certainly big and loud, but too frantic to easily follow. Good fight scenes have a rhythm to them, an ebb and flow, but the fight scenes in Age of Extinction feel like they're hitting every note at full volume as fast as they can for the entirety.

If there was one promise that this film had for even a jaded fan, it was the Dinobots. Unfortunately, their presence is minimal and when they are on screen they are completely lacking any personality, only roaring and growling even when in human form. Bay and Krueger seemed to miss that the Dinobots simply being dinosaur-robots is only half of what makes them fun characters, while the other half is their dimwitted but lovable personalities. Those personalities are completely excised form the film, turning the Dinobots into nothing but a way to turn the film's volume knob from a steady 11 to a 12.

Lockdown drops some vague hints about things to come for the franchise. He works for the Transformers "creators," beings even Optimus Prime is a little vague on the details of. He hints that Prime was part of another, elite group of Transformers before the beginning of the film franchise's narrative. These kinds of hints are almost enough to pique your curiosity about growing the franchise's mythology, but by the end of this film audiences will likely be too exhausted to care. With a nearly three hour runtime, Bay takes the kind of film that should be a sprint and turns it into an arduous marathon. The battles might be visually stimulating at first, but by the third act it feels more like the film is punishing you with lights and sound.

Sound and fury, no matter how impressively crafted, can only get you so far, and that's really all that Transformers: Age of Extinction has to offer. It's not enough to last 165 minutes and, by the end, it's clear that it's not enough to justify a new trilogy of films either.