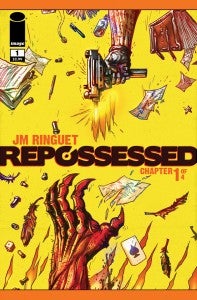 JM Ringuet, the creator behind the fan-favorite series Transhuman, will be hanging a new shingle at Image Comics next month with the debut of Repossessed, a story about an exorcism-for-hire business.

"What I wanted to do was to create a packed fun action thrill-ride, something that would feel like barreling down a highway in a muscle car with loud rock music blasting from the radio and a bunch of friends laughing in the backseat," said Ringuet, who both writes and illustrates Repossessed. "I wanted to make it explosive, surprising, funny, with something new on every page."

The publisher, in turn, calls the book a "Dodge Charger" and describes the story as follows:

"No-nonsense Joe, swaggering Clay, and whip-smart Martha are the best repo team at Dee Agency. Their demon-vanquishing gear consists of big guns, bigger grimoires, and a good supply of silver bullets and saints' teeth—and they know how to use them! (Though Clay does tend to be heavy on the bombastic combat talk). They'll need all of their skills to complete a seemingly easy mission to repossess a rich girl who has run away to Las Vegas—because this is one case of something that happens in Vegas not staying in Vegas."

Repossessed #1 will be in comic stores on January 9.