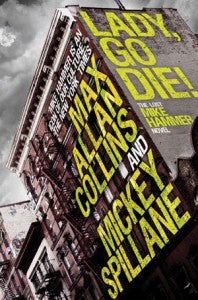 It's not everyday that a legendary and regarded literary figure entrusts someone with their work and characters, but that's exactly what happened to writer Max Allan Collins so many years ago after developing a friendship with writer Mickey Spillane.  Collins has been known for his work in crime fiction for several decades now, with his novels focusing on Chicago private investigator Nathan Heller, his novels based on the C.S.I. television series, and his hand in the graphic novel hit Road to Perdition among his most famous works.  He is also responsible for the novelization of properties such as G.I. Joe: The Rise of Cobra, The Scorpion King, and The X-Files: I Want to Believe.  His work in the crime and mystery genre led him to meet mystery icon Mickey Spillane, creator the famous and archetypal hard-boiled detective Mike Hammer.  After Spillane's death a few years ago, Collins inherited the blessing and the responsibility of access to Spillane's office and works, especially those that remained unfinished.  I talked with Collins about this opportunity, which manifests itself in the recently released Lady, Go Die! , a novel that Collins has worked diligently to finish.

In looking at the context of what made completing Spillane's unfinished Lady, Go Die!, which is the sequel to the very first Mike Hammer novel I, the Jury, such a find in the "treasure hunt" of that office, Collins said, "Lady, Go Die! was especially challenging, and fun, because it dated to the earliest period [of Spillane's writing]...You see, the first six Hammer novels, written between 1947 and '52, were the most famous and successful, and very much the most popular -- Hammer is at his toughest, his wildest, in those early novels."  Collins described the book, which centers on a famous party girl turning up naked atop a statue of a horse, as a great place for new readers to start, since the story comes so early in Spillane's canon.  Collins also felt that Spillane's place in comic book history and the archetype of the hero was important to note with this as well.  "Mickey is highly regarded by many but has always been controversial.  When he came on the scene in the early fifties, he was much criticized.  He was a former comic book writer, which explains a lot of his appeal, and is the source of his kinetic storytelling.  But in Seduction of the Innocent, the famous anti-comic book screed, Dr. Frederic Wertham criticized only one writer of prose -- Mickey Spillane," said Collins, "Mickey's character Mike Hammer took the tough hero up a very big notch.  Hammer slept with women, he drank and smoked, and he was a roughneck -- most of all, he was a vigilante.  He tracked down the bad guy and often flat-out executed him...or her.  From Hammer came James Bond, John Shaft, Dirty Harry, Jack Bauer, every hero who uses the bad guy's means in pursuit of good."  Certainly many comic book heroes to this day can trace some of their roots to Hammer and Spillane's influence on the genre is felt though characters, such as Wolverine, Lobo, and the Punisher.

When tackling such a known writer's work, and especially one who has such a devoted fan base such as Spillane's, care and caution are key, as well as knowledge of the source material.  Fortunately for Collins that rapport and developed awareness started from his very first meeting with Spillane.  "Mickey was my hero as a teenager, and over the years I became a kind of defender of his, writing articles praising him.  At a mystery convention in the early '80s, I was asked to be liaison between Mickey and the con, because I was the "Mickey Spillane guy."  He and I hit it off, and soon I was visiting him periodically at his South Carolina home.  Eventually he became my son Nate's godfather, and we did many projects together -- anthologies, comics, movies, " said Collins.  Even though he knew Spillane and his work well, the project of bringing Lady, Go Die! to the public after all these years was not without its own unique challenges.  Collins said, "The trickiest thing was that the first chapter was missing.  This is the first time I had to begin a Spillane novel without Spillane content.   Mickey's material, interwoven with mine, lasts about two-thirds of the way into the book.  I believe the first and last chapters are my most satisfying contributions to the novel."  The book is a fast-moving mystery, with lots of action and thrills for comic book fans and new readers to the genre and Spillane alike.

In talking about his own work in comics, Road to Perdition specifically, Collins had this to say about the popularity of the title, which spawned a hit movie with Tom Hanks and later several follow-up titles in graphic novel and comic book form, "I can't speak to that [the reason for the popularity].  That's up to readers to decide.  I will say the father-and-son-aspect is appealing, as the movie so amply shows, and Richard Piers Rayner's artwork was magnificent.   When I began to see his pages, I was excited and even inspired.   The artwork on subsequent Perdition projects has also been strong, but Richard is the man."  Part of the reason for the success of this series is Collins' own skill in the genre. With over thirty books written from his own original ideas or the previously mentioned adaptations and novelizations, Collins has staked his claim as a major writer in the mystery and crime genre.  His enthusiasm for the medium is also a factor in his success and skill.  "I've been interested in crime and mystery fiction since childhood.  Sherlock Holmes, the Saint and Dick Tracy started it for me," he said, "But there are lots of reasons why this kind of fiction appeals to me and to millions of readers.  Good stories need a conflict, and a conflict is inherit in crime fiction.  People are also attracted to problem-solving, since so many problems aren't easily solved if at all in real life, but a mystery often makes order out of chaos.  For me the noir poetry of the genre -- think of Raymond Chandler and Mickey Spillane -- is very appealing.  When my work is criticized for its sex and violence content, I always say that, well, that's the big topics, right?  Sex is life and violence is death, and those are the two subjects everybody is interested in."

As for what's next for Collins, he had this to offer us about future projects, "This year I have a Nathan Heller historical novel about the JFK assassination coming out, Target Lancer.  The Heller books are my best-regarded work and I'm pleased that Amazon has brought them out in trade paperbacks and on e-books, where they've become bestsellers.   They usually have at least one on sale as a $1.99 e-book, if anybody wants to sample the series.  Early next year will be a mystery from Hard Case Crime called Seduction of the Innocent with illos by my longtime collaborator Terry Beatty -- it's a tough mystery set in the world of comic books in Manhattan in the early '50s, and the murder victim is highly reminiscent of Dr. Wertham.   Also, Terry and I are just about to start the first new Ms. Tree graphic novel in some time, and the entire run should start republishing in uniform editions soon."

Year of the Shield Captain Carter Hydra Stomper Funko Pop Added to Marvel's What If...? Line