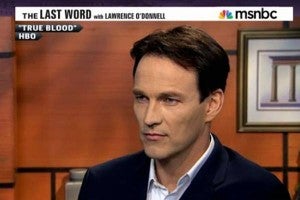 With Kick-Ass 2 and almost every other movie in the box office's top ten underperforming this weekend, and news that both Oprah's much-hyped Lindsay Lohan interview and the season finale of True Blood aired to less-than-spectacular ratings, we've got to ask: was everyone out enjoying the great outdoors on one of the last weekends of summer?

Last weekend's Season 6 finale of HBO’s True Blood scored 4.1 million viewers, up from the previous week's episode--so not all bad news--but down 18% from the fifth-season closer last year and down 9% from the sixth-season premiere earlier this summer. If you take into account the 11 PM showing, the finale totaled 5 million viewers, and will likely about double that when DVR, digital downloads and other alternative platforms are accounted for.

An appearance by True Blood's Stephen Moyer has helped raise visibility this week for MSNBC's The Last Word with Lawrence O'Donnell, though. So there's some demand for the show among those who don't have HBO, maybe.

Breaking Bad also came down from its record-high ratings for the previous episode, garnering 4.8 million viewers, a 19% loss from the midseason premiere. That's not too unusual, though, as only the absolutely biggest shows on the air (The Big Bang Theory, The Walking Dead, certain reality series) pick up viewers rather than losing them after a premiere or other massively-promoted episode.