“Maybe Tomorrow” – the third episode of the second season of True Detective – opens after Ray (Colin Farrell) was shot while investigating Caspere’s Hollywood home. We see Ray at the bar, talking to his father, during some near-death-experience dream. He wakes on the ground in Caspere’s house with only a few cracked ribs, having only been shot with the kind of non-lethal rubber bullets that policemen typically use. The shooter is gone, as is the camera that was recording the house’s interior.

Ray meets Frank (Vince Vaughn) at their usual bar and asks him who else knew about the house – implying that Frank may haves set him up to be shot. Frank is insulted at the insinuation and shares with Ray a few more non-vital details of his business venture with Caspere. Afterwards, Ray goes to the doctor, who says that his lifestyle is killing him. The doctor asks Ray if he even wants to live, but Ray doesn’t respond.

Frank later meets up with a man named Bart, with whom he’s had previous dealings, supporting Bart with an estate venture. Though it seems that Bart doesn’t owe Frank more money, Frank threatens him into agreeing to share 25% of his net profit in the future.

While Ray is waiting to be cleared by a doctor to continue working, Ani (Rachel McAdams) and Paul (Taylor Kitsch) combine forces to question the many people that Caspere had been calling from the landline of his Hollywood place. They go to the home of the Vinci mayor – where they get virtually nothing out of his wife. The mayor’s son is particularly non-compliant, demanding they leave, since they do not have a warrant.

Ani and Paul next investigate Caspere’s safety deposit box, which the paperwork for several corporations he had recently set up, as well as some blue diamonds.

Afterwards, Ani meets with her bosses, while Ray meets with his. Neither Ani nor Ray has much to say about each other, angering their superiors. Ani’s boss goes so far as to say she should consider seducing Ray in exchange for a promotion, while the mayor of Vinci demands that Ray get more out of Ani. He implies that he would like to be taken off the case, but they don’t grant it.

Ray visits her father for the first time in a long time, likely wanting to have a serious conversation about his near-death dream, his family, and/or the possibility of leaving his job. Ray’s aloof father doesn’t engage – though he has recently trashed his own police badge, which Ray scoops out of the garbage.

Elsewhere, Paul meets up with one of his soldier buddies, Colter, who asks Paul about his current coping status. Paul seems to want to ignore and forget everything that happened to him, while Colter thinks it’s best to embrace the past. Colter pushes a topic too far – managing only to say “those three days” before Paul cuts him off. They get in a brief, physical altercation before Paul storms off, with Colter apologizing profusely. 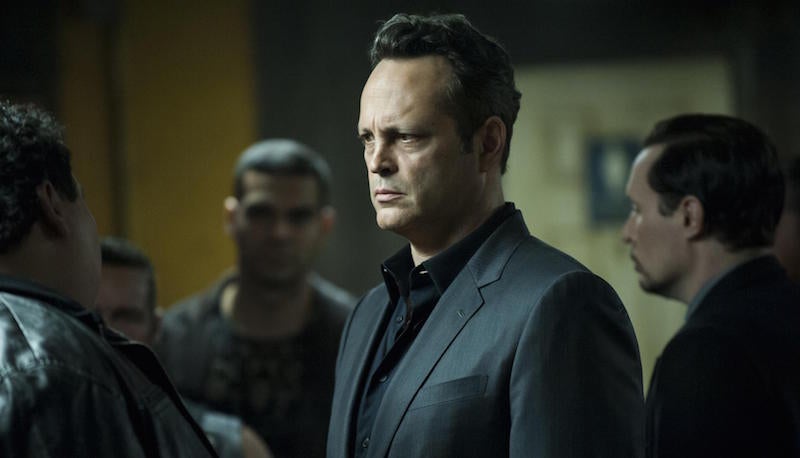 The next day, Ani, Paul, and Ray go to the set of a film that Caspere had a producer credit on. Ray talks to the set photographer, who admits that the director knew Caspere and even partied with him. The director admits to the party but claims not to know if there were any hookers at the event.

Meanwhile, Frank begins to suspect that someone is coming for him, after he met up with Osip – who still isn’t going to follow through on their deal. Frank wonders if Osip was in on Caspere’s death. Soon after, Frank learns that one of his men has been killed. Convinced that someone is trying to kill him, Frank demands a meeting with everyone that works on his properties that night.

Once night falls, Paul goes around town, asking working girls if they’ve seen Caspere, but getting no answers. Eventually, a man admits to recognizing Caspere – who was a regular at a nearby club. He claims that Paul wouldn’t be able to get into the club without him, so the two go together. Paul meets another man at the club, who knows of a girl named Tascha who had been hired by Caspere, though she hasn’t been around for a while.

Ani is at Ray’s house before they start more questioning, but they’re interrupted when Ray’s wife comes to the door. She admits that some state police had come to her home, asking her questions about Ray, including questions about whether he had ever gone after her rapist. She offers him $10,000, asking him not to contest custody, but he won’t accept it.

Ani and Ray are in town questioning yet someone else, when suddenly their car is set on fire. They see a masked man across the street and chase him for some time – with Ani in the lead, while injured Ray follows. The masked man ultimately leads them across a highway, where Ray pushes Ani out of the way of an enormous truck just in time, saving her and injuring himself further. She thanks him, and he retorts that if she wants to thank him, she could tell him what the state “has on him.” Ani says she does not know.

Lastly, Frank has his big meeting at the club where Paul coincidentally happens to be. He shares his suspicions with the men that someone is coming after him – and they’re insulted, joking that Frank has nothing to steal at this point anyway. Danny Santos takes the lead in trying to put Frank in his place, eventually prompting a fight. Frank beats him in a brutal fight that ends with Frank pinning Danny down, and ripping out his gold teeth.

When Frank gets home that night, his wife, Jordan (Kelly Reilly), is waiting. She wants to make up with him after they fought earlier in the episode over in vitro fertilization; he was struggling physically with the process and mentally with the entire idea. He’s unable to say much at all, after the night’s ordeal.