WARNING: Major spoilers ahead for last night's episode of The Walking Dead on AMC. While this column always features spoilers in the way of plot descriptions, this week's recap features an image at the bottom of the story which pretty much gives away the ghost in one image. Don't read, or even scroll through, if you don't want to be spoiled. Also, don't go to AMC's website, where a similar image is featured on the front page. 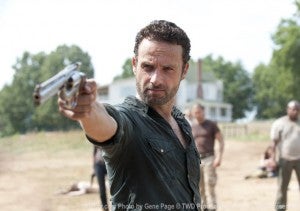 One of the guiding principles of Robert Kirkman's brilliant comic book series The Walking Dead is that "no one is safe." Characters who were beloved by fans and an important part of the series' overall chemistry have been killed time and again, shocking and thrilling Kirkman's readers. That anarchic spirit of exploration has carried over to the TV show, leaving us with a world where many comics readers find themselves uncomfortably unfamiliar with the stories of characters they've been reading for years. It's one of the dynamics that makes the show work, because when a story so often relies on twists, surprises and shock to move the narrative along, even purists have to accept that it may be somewhat hobbled if a good chunk of the viewership knows ahead of time what will happen (see also: True Blood, where they stick closer to the central narrative of the Charlaine Harris novels but are by no means slaves to them).

This week, the action opens on the survivors' campsite while Shane and Carol watch as Andrea sharpens her knife. Everyone is quiet and miserable as Rick rejects Lori's advances and Glenn stares longingly at Maggie, up on the farmhouse porch, out of reach. Finally he stands to address the group, dropping the bombshell that the barn is full of walkers and drawing Rick's ire for making the announcement and violating Herschel's trust. The group goes there to confirm it, and then to argue about strategy, with Shane breaking from the rest of the group. If they must abide by Herschel's rules and cannot kill these walkers, he says, maybe it's time to abandon hope for Sophia and move on to Fort Benning. This brings him into escalating conflict with the rest of the group and he almost comes to blows with Daryl before moving on to screaming at Rick and Dale. All the noise riles the walkers, who pound away at the inside of the chained-shut barn door. Alone, later, Shane returns to the barn to evaluate its security and, again, riles its occupants.

At the chicken coop, Glenn tries to get Maggie to talk to him. She takes his hat, places an egg in it, crushes the egg against his head and leaves.

At the campsite, Carl and Lori are studying together when he asks whether she thinks Sophia is dead. Carl tells her that he isn't ready to give up on Sophia, and that even after she returns he wants to remain on the farm and make a home there. At the horse barn, Daryl and Carol discus whether he should head back out after Sophia. He wants to leave, but she tells him that he still needs to heal from his many injuries, and that there's no guarantee that they'll even find her daughter. This infuriates Daryl, who throws the saddle and reopens a wound before storming off.

At the RV, Andrea tells Dale--who has just given his signature hat to Glenn--that she's heading off into the woods with Rick to look for Sophia after Rick finishes talking with Herschel. Dale confronts Andrea about Shane, asking her if that's what she wants to be. She says that Shane refuses to be a victim and that he needs to stop worrying about her. She leaves, and Dale seems shellshocked, asking Glenn to go get him some water. 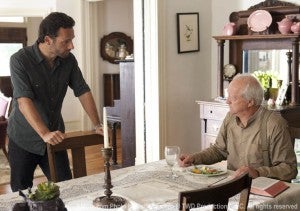 Inside the farmhouse, Herschel and Rick sit down at the table to talk. When Rick tells him that they need to discuss the barn, Herschel tells him that he wants Rick's band of survivors off his land by the end of the week. Rick counters by telling him that while Herschel may think the walkers are alive, that his people absolutely are and that by sending them out into the world, he risks their lives. He tells them that in the time since TV cameras stopped rolling and Herschel last saw the outside world, it's become a much worse place, and he asks him not to send the survivors back out into that world. When that is met with silence, he tells Herschel that Lori is pregnant and asks him to reconsider his decision. as their conflict escalates, Rick leaves and the camera moves to show that Maggie has been watching the whole thing.

In a field near the barn, Shane is seated on an old tractor. Rick joins him to talk about what to do, and the two go around in circles for a while about what's the right course of action before Rick finally tells him that Lori is pregnant. That seems to calm Shane considerably, but he still remains after Rick leaves, staring at the barn.

Back inside, Maggie and Herschel discuss what to do about the survivors. When he asks her why Rick's band should be his responsibility, she quotes scripture to him and tells him he needs to be more accepting of outsiders, the way she was when he remarried. He asks her if it's about Glenn, and she tells him (apparently for the first time) about the walker who attacked her at the pharmacy and that Glenn saved her life there. Their conversation is interrupted by Jimmy, who tells him that "it's happened again," and Herschel heads outside to recruit Rick for to help him with something.

Back at the campsite, Shane approaches Lori with the knowledge that she's pregnant. He tells her that Rick is too idealistic to survive in the world of The Walking Dead and that the cast culling on the night of Amy's death was Rick's fault. He also tells her that he's certain the baby is his, and she tells him that even if that's biologically true, the child is Rick's. This is enoguh to provoke Shane to walk away. Along the way, he talks briefly with Carl who tells him that they can't stop searching for Sophia. Shane tells Carl that, in that case, they'll do "whatever we've got to do" to stay before Carl is called away by Lori.

Shane continues on to the RV, where he tears through some obvious hiding spots looking for the guns. When he has no success, he asks Glenn (back at his post atop the RV) where Dale went, and Glenn tells him that Dale had vanished while he was off to get water, and Shane immediately understands that Dale is hiding the weapons and storms off. 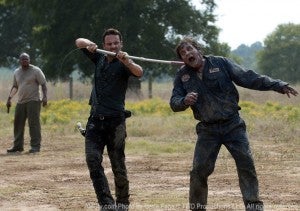 In the woods, Herschel takes Rick and Jimmy to recover a pair of walkers. Herschel says that it doesn't matter whether Rick and his crew can see them as human beings anymore, but that in order to stay at the farm, he'll have to treat them that way. Moments later, the group is fishing a couple of walkers, who had been stuck in the muddy shore, out of the water.

Elsewhere along the creekbed, Daryl and Carol talk about Sophia. He tells her that he thinks her daughter is still out there, and Carol says that she's now sure they'll find her.

Glenn momentarily abandons his post on the watch to talk to Maggie. He tells her that he had forgotten until now that the walkers were dangerous, and that he revealed her secret in order to make everyone confront the reality of the barn becuase he'd rather have her alive and mat at him than dead.

In the swamp, Dale is burying the guns in plastic bags when Shane arrives. Shane tells Dale that he's "pretty much dead already" and to give him the guns. Dale asks him whether, if he doesn't, Shane will just shoot him like he did Otis and tell everyone another story. Eventually the argument escalates to where Dale threatens Shane with the only non-packed gun becuase Shane refuses to leave without the rest of them.  Eventually, though, he gives up the weapons and tells Shane that the compromised new world is where he belongs, and that he's let it corrupt him. 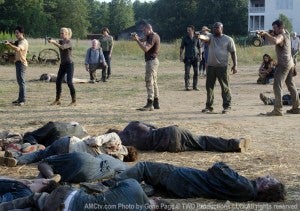 Back at the farmhouse, Shane starts handing out guns to the remaining survivors, telling them that they're needed now that the secret of the barn is out and the farm is no longer considered save. This sets off a debate in front of the house when Rick and Herschel arrive with the walkers in tow. Shane charges at them, taunts Herschel for a while, and then riddles one of the two walkers--the one who Herschel knew in life--with bullets before finally shooting it in the head. He is clearly out of control at this point, delivering a long, mad tirade about how he's had enough. Then, he heads off to open the barn doors. Rick tells Herschel that if he's to be stopped, Herschel needs to take the reins to the second walker so that Rick can go after Shane, but Herschel is too shell-shocked to respond.

The doors open and a dozen walkers pour out, the survivors taking them down as they shamble forward, while the Greene and Grimes families stay back and watch in horror. In the silence and sobbing that follows, Dale finally arrives and looks on the tableau of carnage in shock. In the silence and sobbing that follow, a final walker emerges from the barn--Sophia, a punch in the gut to everyone present. It is, naturally, Rick that has to step forward and put her out of her misery. 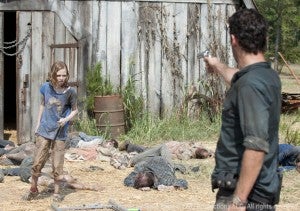 After Otis' death, much was made of the fact that the character had made it for much of the series' run in the comics before being killed, but the changes to the world of the TV show--described by Kirkman in interviews as the ripples rising up from the fact that Shane survives--have now claimed a character who I think may be the first victim currently alive in the long-runing published series.

No one is safe.