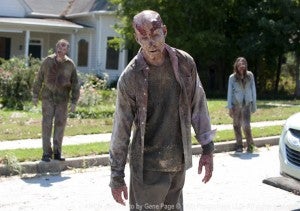 In advance of next week's midseason finale on AMC's The Walking Dead, things really started to heat up this week, with a number of stories that viewers or longtime readers of the comic were waiting to see some movement on advancing to center stage.

It begins quietly, with Carl finally out of bed and helping his mother feed the chickens on the Greene Farm. Their playful banter and good-natured ribbing is a welcome (if momentary) distraction from the existential crisis and sullen, staring expressions that have become the norm in the Grimes family this season. When they turn their back, Beth Greene takes a chicken, breaks its legs and then throws it into the barn where, at the end of last week's episode, we saw dozens of roamers. The zombies swarm on the fresh meat, and our story picks up where last week's left off, with Maggie begging Glenn to keep quiet about the secret of the Greene barn. This leads to a brief and awkward exchange with Dale and T-Dog back at the camp.

In his tent, Andrea brings the recuperating Daryl a book to keep him occupied and apologizes for shooting him last week when she thought he was a roamer. He forgives her easily, warning her against shooting him again lest he take it personally.

Around the fire, Glenn confronts Lori about having not yet told her husband that she's pregnant. He wants her to take better care of herself and offers her his share of the food they're eating. He asks her what she needs from him if he runs into town and she tells him she only needs him to keep quiet. Seems to be a recurring theme, poor guy.

Shane, Rick and Jimmy are huddled around the map on the hood of the pickup when Glenn comes to bring them apples; again, there are a few awkward moments of silence before he moves along without telling them what's on his mind.

Patricia and Beth approach Rick about getting firearms training while Carl approaches Shane. Before he walks away, Shane catches him with a gun in his belt, leading to a roundtable discussion about whether or not he should have one. Ultimately Lori's resolve weakens (even if her fears don't) and she allows him to be trained.

Before Shane and Rick take the whole crew off of the Greene property to learn, Glenn is caught by Dale in a lie when he declines to follow them so that Dale can teach him mechanics on the RV. Ultimately after trying to soft-pedal the secrets he's keeping, he blurts both out in one sentence, leaving Dale a bit stunned. 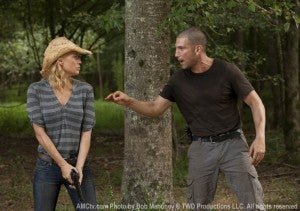 On the gun range, everyone seems to be struggling to knock bottles and cans off of a fence, but Andrea turns out to have been putting bullets through the "O" in a "No trespassing" sign.

Moments later, Dale approaches Herschel, seeing the farmer taking care of the horse which bucked Daryl last week, apparently returned home this morning unassisted. He leaves Glenn out of it but claims to have seen the walkers on his own, which leads to a conversation wherein Herschel tells him that he believes Herschel to be "sick people," and that killing them en masse is an "atrocity." He accuses the survivors of "killing a person" when they put the well walker out of his misery, and when Dale tries to tell him that the people who come back from the dead, aren't the same people anymore, Herschel shuts him out, saying that his wife and stepson are in the barn, and that they're people. He asks Dale to keep his secret, saying that any assistance Rick might be able to lend in making the barn safer would come at the cost of revealing the truth to the entire group, not all of whom might be trustworthy.

Not long after, Lori approaches Herschel while he's mending a fence and thanks him for his hospitality, a thanks which he shoos away, saying that he's happy Carl is better but that he expects them to be back on the road soon.

Meanwhile, Shane is struggling with his own anger while he tries to teach Lori how to shoot at a moving object (see the scene here, in last week's preview from AMC). Ultimately, he pushes too far and she storms away.

Back at the campsite, Lori approaches Rick and challenges him about Herschel's assumption that they're going to leave; she's angry at him for not telling her earlier, and worried about losing the shelter and medical care that the farm provides.

On the road back to the farm from the firing range, Shane drives up alongside Andrea and apologizes for crossing the line, explaining that he was only trying to get her frustrated and riled in order to help her improve her shot. He offers her to come along as his backup while he looks for Sophia, and she goes.

Back at the camp, Dale sees Lori looking ill and decides to approach her about her secret. Without preface, he tells her that his wife was always sick, too, when she smelled meat cooking. He told her that his wife couldn't be at Thanksgiving, or for days after. She picks up on the fact that Glenn told him, and tells him that she hasn't yet told Rick. She tells him about her guilt over sleeping with Shane and her fear that the baby will never know joy, growing up in the post-zombie world, and he's unable to console her. She approaches Glenn, and tells him that he was right about her needing help, then gives him a hug when he says he'll make a run into town for her. 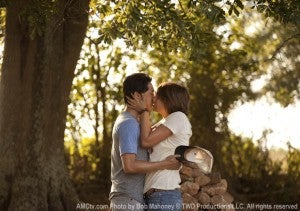 Maggie comes along with Glenn, but refuses to talk to him because she knows he told Dale about the barn. The two discuss the nature of walkers, as Maggie gets progressively angrier. When he shows her the shopping list, she stalks off angrily behind the pharmacy counter. Through the shelves, she's attacked by a walker, which Glenn has to kill.

Pulling the car through a residential neighborhood, Shane and Andrea decide to go house-t0-house looking for Sophia. While Andrea tries to put a brave face on the matter, Shane has no interest.

Meanwhile, back at the campsite, a hysterical Maggie confronts Lori, throwing the items procured from the drugstore at her and shouting. the final item, to Glenn's surprise, is the morning-after pill. Glenn, following her, tries to calm her down and gets a kiss out of the deal, only for her to storm off after claiming that his friends constantly treat him as bait.

On the hunt for Sophia, Shane and Andrea come to another dead end and then, before they can get back to their car, are swarmed by a group of walkers. Shane takes a number of them out and then stops firing to give Andrea target practice for a while.

At the campsite, Glenn approaches Lori to be sure she's OK, and asks if she thinks the morning-after pills will work. When Lori tells him that she doesn't know, and doesn't know if she wants them to, he gives her a bottle of prenatal vitamins he picked up on impulse. He tells her that while he can't tell her what to do, maybe it's a choice she shouldn't make alone.

As Andrea and Shane make their way back from the search for Sophia, she begins groping him and the pair stop in the car for a little afternoon delight. 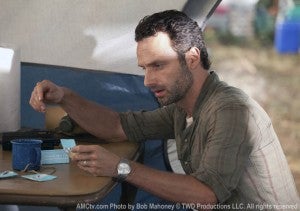 Back in her tent, Lori downs a fistful of morning-after pills, then sobs and runs away to the treeline to throw them up.

Returning home from the search, it becomes clear to Dale from body language that Dale and Andrea have had sex. He tells Shane that, with a nice new car and plenty of fuel, maybe it's time that he finally live up to his stated desire to leave. When Shane confronts him about whether Dale thinks the group would be better off without him, Dale tells him that he still remembers Shane pulling a gun on Rick, and that he's suspicious about exactly what happened to Otis on the night he died. With that, Shane threatens Dale, asking what he thinks he would do to him if he's "the kind of man" who would shoot his best friend.

Rick returns to the tent to find the wrappers for pills still sitting on the table, and marches off to confront her with the information. In the ensuing argument, she confesses that she and Shane had slept together when Rick was presumed dead, which he understands much better than the attempted abortion.