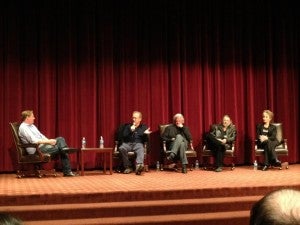 At the Twin Peaks Retrospective at USC earlier today, a number of Twitter users report series co-creator Mark Frost as saying something that they are interpreting as a suggestion that the long-cancelled TV classic could continue. (Thanks to Adept Games designer Daniel Boutros for the image at left, which he tweeted.) Asked whether there could be a third season of the series--a question that's been pretty standard since the day the second season ended but which takes on an air of renewed urgency in light of NBC's recent suggestion that they would reach out to Frost and his co-creator David Lynch to explore the idea--Frost reportedly told the audience that "All I can say is, Twin Peaks is a continuing story, and that's from both David and me." In the past, the pair have not always seemed to be on the same page as it regards following up the short-lived series, which is credited with elevating the art of the TV drama and leading to the rise of complex, mythology-driven series like The X-Files and Lost. Lynch has often been seen--rightly or not--to be the holdout, hesitant to revisit the little logging town on the Canadian border. Both Frost and Lynch (through his daughter) denied rumors earlier this month that they were in talks to resurrect the series. Over the years, the two showrunners have generally stopped short of ruling out a Twin Peaks return. Frost, who has a bit more of a commercial outlook than does Lynch (he worked on the Fantastic 4 movies for Fox, for instance), has always seemed a bit more open to the continuation of his best-loved story. The revelation came at a Q&A following a screening of the Twin Peaks pilot, often discussed as one of the greatest single episodes of television ever made, and the first two episodes of the series at the USC School of Cinema.