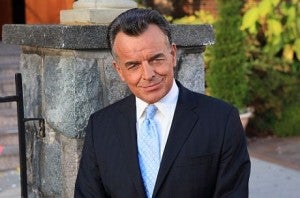 Ray Wise, who once played Laura Palmer's father on Twin Peaks and now plays S.H.I.E.L.D. Agent Maria Hill's father on How I Met Your Mother, joined our friends at KSite TV earlier this week to talk about the Reaper reunion on FearNet, telling the site that he would jump at the chance to play the devil again if somebody could find a way to produce more Reaper.

"Absolutely. In a second. Would a millisecond be too long? I don’t think so. I would be there in my dark blue suit and my light blue tie, with bells on," Wise said. "It really ticked me off that they canceled us, to tell you the truth. Had we been on another network, I don’t think we would have been, but I guess we just didn’t fit their demographic as mch as they would have liked. I just wish we could have done more. That’s the main reason why I’m thrilled that FEARnet is showing Reaper. It certainly opens it up to possibilities in the future, so I look forward to that."

That's certainly promising, especially since Wise is an expert at trying not to raise expectations too high; in the twenty years since the end of Twin Peaks, he's faced those same questions over and over again from fans of that beloved franchise hoping to see more.

That's where the similarities between the two supernatural cult sensations end, though, Wise told KSite.

"Well, [playing a demonically-possessed character in the past] certainly factors into my arc in my career. Going from playing Leland Palmer in Twin Peaks to becoming the Number One Bad Guy of all time, the Devil. I think probably a logical progression. But, no, it didn’t factor into being chosen for the role. I came in at the end of the casting process. They had already seen over 100 actors, and they’d even seen a lot of guys who had played the Devil before! Some really well known names, but they hadn’t run into anyone who fit the bill entirely, and I came in at the end of the process. I got the script and I liked it, so they set up an appointment for me to read for the producers and the creators of the show, and I came out and I did that Chicken Fried scene in the kitchen. I guess the way I talked about Chicken Fried Steak turned them on, and they felt that I would be a good Devil."

Wise also praised fan-favorite filmmaker Kevin Smith, who directed the Reaper pilot, saying that Dogma was one of his personal favorite films.

Twin Peaks's Ray Wise Would Do More Reaper "In a Second"

Why Did Big Show Leave WWE for AEW?

Among Us Video Shows What the Game Looked Like Before Launch