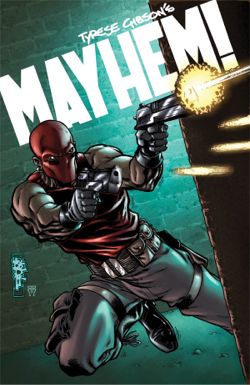 Tyrese Gibson, the Multi-Platinum selling R&B singer and mega-star behind Transformers: Revenge of the Fallen, Death Race, and 2 Fast 2 Furious, is teaming up with Angel artist Tone Rodriguez and co-writers Mike Le and William Wilson to create Mayhem for Image Comics. "I'm extremely excited to be working with Image Comics on the launching of my debut comic book Mayhem," Gibson said. "Image has a long and rich history of great titles and I am honored to be a part of that history. Robert Kirkman's and Eric Stephenson's input throughout this creative process has been invaluable and I know we've produced a special comic book for all fans to enjoy." Tyrese Gibson's Mayhem begins on the streets of Los Angeles, where a brutal crime wave led by the mysterious Big X has the entire city in a state of paralyzed fear. With even the police force incapable of stopping him, Mayhem, a faceless vigilante with only his partner Malice and never ending vengeance to back him up, strikes back against the criminal masses. They will take on Big X to take apart his organization in hopes of restoring peace to the City of Angels. Image Comics Chief Operating Officer and Walking Dead writer Robert Kirkman added, "With the entertainment world at large currently bowing at the feet of comics and its ideas, it's incredibly exciting to have a media mastermind like Tyrese Gibson turning his attention our way. Mayhem is a unique, engaging comic-book experience that could only come from the mind of someone who's risen to the top of so many different fields – anxious to take another by storm. Ready or not, Tyrese Gibson is in the house - - and it's going to be Mayhem!" Mayhem #1 will be a thirty-two page full color comic book, which will retail for $2.99. Mayhem #1 is scheduled to arrive in comic book stores on August 5th, 2009. The series will run for three issues.