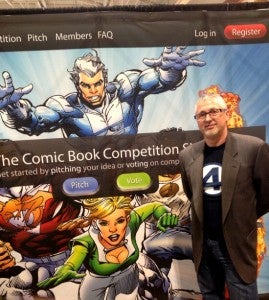 There are plenty of comic book fans out there who harbor dreams of breaking into the comic book industry. Whether writer or artist, the task can seem intimidating. How do you get your foot in door? How do you fund your first project when nobody seems to want to give you a chance?

Well, what if there was someone who could, potentially, offer your $50,000 to support your first comic book project? Well, now there's Ucreate Comics, and they want to do just that.

“We have a million dollar fund to develop comic book properties,” said Donald Lanouette, founder and creative director of Ucreate Comics, whom we spoke with at the Wizard World Nashville Comic Con. “Anyone can pitch. You pitch us the idea, it goes into a competition. Fans, family, friends vote for you. If you win, we invest $50,000 into the property.”

The voting takes place at the fund's website, UcreateComics.com, a website designed to be a kind of cross between American Idol and Facebook, but for comic book enthusiasts. Writers and artists can submit their pitches, fans can vote, and the two can interact with each other through the website. Its a system designed to give new talent a low-risk opportunity to show what they can do.

“Our model is to give aspiring artists and writers their break,” said Lanouette. “We're non-exclusive. You can work for us, you can pitch us your idea and, if it goes into the competition and it doesn't win, you can pitch it to someone else. Our whole model is to get you your first comic property, your first contract, so you'll hopefully end up working for Dark Horse, Image, Marvel or DC. We want these guys to grow and become professionals and hopefully come back and support other newcomers.”

Lanouette said he came up with the idea for Ucreate Comics when he saw how hard it was for new creators to have their ideas heard.

“No one could pitch anything,” he said “Everyone was afraid to take pitches. I've been a creative director for 25 years, so I love helping artists and writers develop, but you can't if they never get the chance to become professionals. So, I came up with the idea about 10 years ago as, basically, starting a company that helped guys get their first break and then move on.”

One of the important things about Ucreate Comics is that they don't take control of the copyright to any of the properties that are pitched or that win their competitions. Creators keeping the rights to their creations is important to the fund (and they work with Neal Adams, so you know they're serious about it). That kind of support for creator's right – given how things have often worked out in the comics industry – can come as a surprise to potential participants.

“Its an interesting idea,” said Lanouette. “When you tell an artist or writer you're going to invest into their property, but you don't want the rights, it confuses them. They're always asking us – even after they check our FAQs – how are we going to screw them?”

Ucreate Comics has been busy building the software they use for their competitions, but they decided to run a competition at universities and colleges they were visiting while in the process of beta testing. The winner was Morgan Blackburn, who pitched a film idea for a “time-traveling, civil war reenactment piece” called “Gettysburg.” Lanouette said that transforming the script into a graphic novel was challenging, and that Blackburn would still like to see it made into a movie some day.

“Part of our model is that we can build a fanbase for him and he'll be able to take that fanbase from the sales of the comic book and move the property forward. That's what our idea is. We're not traditional publishers, we're actually trying to be a company that helps you get started, helps you get your fanbase, and helps move our creators along.” Lanouette also stressed that each property is treated individually so that they can do what's best for that property and that creator. “Every property becomes its own entity,” he said, “that's part of the model.”

There are several competitions going on over at Ucreate. The current Ucreate Pitch 100 competition is just wrapping up, with the winner set to be announced at Wizard World Austin Comic Con on November 23. They are also partnering with ComicsPriceGuide.com for a competition with a $7,500 package prize called “Start the Presses,” aimed at creators who have completed their first published work, but need help funding their next installment.

“I meet guys who've done Kickstarter,” Lanouette said, “and they do their first book and then it turns into 'okay, I've done the first book, but now I don't have funding for the next book.' So we're holding a 'Start the Presses' series of competitions where we'll actually partner with you to fund your next book in your series and, by doing it in a competition model, hopefully get you new fans.”

They are also about to begin a competition for a $13,500 illustration contract for the graphic novel “Red Goddess” by writer David W. Richards, and also have an ongoing competition for freelancers to write or draw SUITZ, their in-house, quarterly comic book about a reality show that gives four characters four suits that grant them each superpowers.

In addition to the competitions, creators can open a paid freelancer account with Ucreate. Freelancers can compete for professional contracts, run an online store to sell their products, and keep an online portfolio – all an important part of the social aspect of the Ucreate community.

You can sign up, pitch, vote and find out more about the Ucreate Comics Fund at UcreateComics.com.