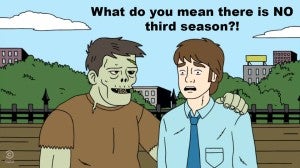 After months of uncertainty, Comedy Central's fan-favorite, low-rated animated comedy Ugly Americans has been officially cancelled, according to a message from the show's producers made available on its official Facebook page.

The producers say that the late notice of cancellation was as a result of all involved trying to keep the property alive and that while there's no chance of them making it back onto the schedule, they're still exploring options as far as how the show could live on.

You can read their message below.

As you might have gathered by now, Comedy Central did not renew us for a 3rd season. The reason this notice is coming so late is that, in spite of lukewarm ratings, the network did everything in their power to keep the show alive by trying to find outside financing. We came very close but unfortunately some legal technicalities kept any deals from going through.

We are exploring our options, even ones that don’t include traditional TV episodes, such as original web shorts or even a graphic novel. We love this universe and the characters and we want to keep them alive (or undead) for you in any way we can. We the producers would continue to make the show without a paycheck to ourselves, but unfortunately animation and all the aspects of TV production are rather expensive.

We appreciate your steadfast loyalty to our little show. We will continue to update this page with any news we have about Ugly Americans, along with new projects of interest from the writers, producers, animators, and cast.