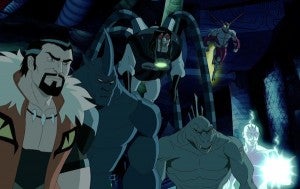 Marvel has released a new clip from the forthcoming season of Ultimate Spider-Man season two, in which the wall-crawler is pitted against some of his deadliest villains.

Here's how Marvel puts it:

Spider-Man must lead his team of teen heroes against the greatest assembly of super villains the world has ever seen!  Season Two of the hit series ULTIMATE SPIDER-MAN continues as Spider-Man is trapped alone face to face against his greatest fear – the Sinister Six! Can Spidey make it out in one piece against The Lizard, Electro, The Rhino, Kraven, The Beetle and Doctor Octopus?

What happens when Spider-Man and his ragtag team of teen heroes has to square off against the Sinister Six? Check it out below.