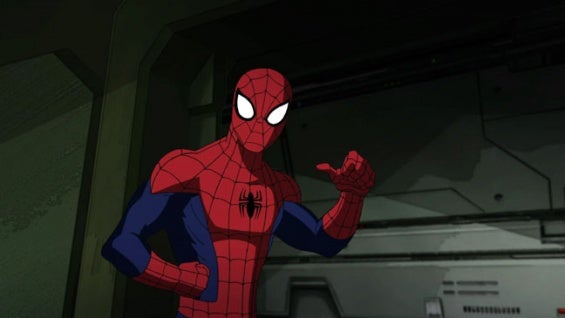 Disney XD released a new, two-minute clip from behind the scenes of this weekend's Ultimate Spider-Man Father's Day episode, which airs Saturday morning on the cable network. Hosted by Steve Blum, who played Wolverine in Wolverine & The X-Men as well as other video games and animated series over the last several years. Blum guest-stars on this weekend's show, bringing Wolverine into the Ultimate animated universe.

The episode appears to revolve around a body swap between Spidey and the ol' Canucklehead, something that's oddly appropriate for father's day, given that it was the premise of the '80s comedy Like Father, Like Son (starring Dudley Moore and a pre-insanity Kirk Cameron). It also gives the voice actors a chance to play with their interpretations of the characters a bit, given that suddenly you've got somebody who's the same guy, but in a new body, and that'll require all kinds of bending over in terms of performance.

This weekend, Marvel Television and Disney XD offer up a very special Father’s Day gift everyone will love .... a brand new episode of Ultimate Spider-Man featuring Wolverine! Acclaimed comic writer Brian Michael Bendis takes his story from page to screen as Spidey and Logan team up and freak out when they mysteriously switch brains! Check out this behind-the-scenes interview with Steve Blum, the voice of Wolverine, as he talks about what it’s like to be Spider-Man for a day.

This brand new episode kicks off the Ultimate Father’s Day Marathon at 11am/10c inside Marvel Universe on Disney XD. Celebrate the day with YOUR hero and six back-to-back episodes of the hit animated series. Plus, check out https://MarvelKids.com/Dads for ways to incorporate your favorite Marvel Universe characters into the day’s events.

Ultimate Spider-Man Goes Behind the Scenes in New Featurette