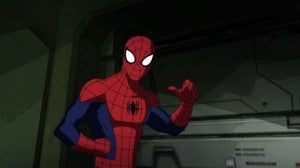 According to The Hollywood Reporter, Disney XD has ordered a second season of their freshman animated series Ultimate Spider-Man.

Disney XD Vice President and General Manager David Levine said of the renewal, "As the anchor of our Marvel Universe block, Ultimate Spider-Man Season 2 will be back with more humor, villains and adventurous storylines that boys (and girls) will love."

By "anchor," of course, he means "sole survivor," since Avengers: Earth's Mightiest Heroes was cancelled yesterday, to be replaced by a new series called Avengers Assemble. Rumors have it that Avengers Assemble will take place in the same universe as Ultimate Spider-Man, allowing for some crossover--something that Avengers: Earth's Mightiest Heroes did not. The story in The Hollywood Reporter seems to confirm this, saying,

"Season 2 will feature Spider-Man teaming with other heroes from the Marvel Universe including the Avengers as well as exploring the origin of S.H.I.E.L.D. trainees with more revealed about Nova, Iron Fist, Power Man and White Tiger."

"With Season 2, the series introduces popular Marvel heroes and villains you've never seen before on the small screen," head of Marvel Television Jeph Loeb said in an interview with THR.

Based on the comic book series of the same name by Brian Michael Bendis, Ultimate Spider-Man follows a slightly-modernized version of Peter Parker as he navigates the trials of being a high-school-aged superhero. It boasts an all-star cast of voice talent, including Clark Gregg, of Iron Man, Thor and The Avengers fame, as Principal Coulson, a riff on his fan-favorite S.H.I.E.L.D. agent from the live-action films.

According to THR, all of the principal support staff behind the show--Man of Action Studios, Bendis and Paul Dini--will return for the series' second season.

Ultimate Spider-Man Renewed for a Second Season on Disney XD