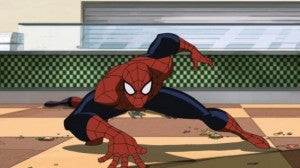 Marvel Studios have released a trailer for the upcoming second episode of Ultimate Spider-Man, which begins January 21 on Disney XD.

The series will air as part of a Marvel Universe-themed programming block including Avengers Assemble (a new series designed to replace Avengers: Earth's Mightiest Heroes) and Hulk and the Agents of S.M.A.S.H.

Those new series are expected to debut sometime in the spring or summer, after having been teased at San Diego Comic-Con International this year, where test animation of the new shows was shown to audiences at the Marvel Television panel.

Check out the official description and video below!

On his journey to become the Ultimate Hero, Peter Parker has handled tough challenges. From learning to team up with fellow Super Heroes (including The Avengers!), to fighting baddies from across the Marvel Universe, to remembering to pick up groceries for Aunt May, Spidey thought he had things all webbed up.  Now in Season 2, his world's been turned upside down as his teammates become roommates, and they're left to face foes without the help of S.H.I.E.L.D. But when iconic Marvel villains like The Lizard, Kraven, Electro, the Rhino and Doc Ock team up to take on the young heroes, it's time for Spidey to discover the "great responsibility" of being a leader. Catch the one-hour SPECIAL PRIME TIME PREMIERE of Ultimate Spider-Man Season 2, January 21 at 7p/6c on Disney XD. And keep up with the team every Sunday at 11a/10c inside Marvel Universe.

Report: Why Has Damian Priest Been Gone From WWE Television?

The Suicide Squad Released a New Trailer and Fans Are Shook