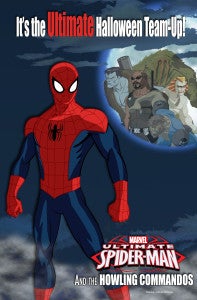 Here, though, the Howling Commandos aren't the grizzled World War II unit we're used to from the Marvel Comics. Instead, it's a super-team composed of Blade, the vampire hunter; Jack Russell aka Werewolf by Night; The Living Mummy; Frankenstein’s Monster and Man-Thing. The hour-long episode will see Spider-Man and his monstrous allies take on Dracula.

“This is the biggest event in Ultimate Spider-Man history,” said Jeph Loeb, Marvel’s Head of Television. “We’ve brought Spidey together with our greatest Supernatural heroes and some of the hottest names to voice them. We’re hoping families turn down the lights and turn up the volume for our spookiest special yet, courtesy of Ultimate Spider-Man!”

The episode will re-air the following week within the weekly Marvel Universe block on Disney XD, on Sunday, October 13 at 11am/10c. Fans can get a sneak peek at part one of the one-hour Halloween special with free download on iTunes beginning Monday, September 30.

Ultimate Spider-Man Teaming With the Howling Commandos for Halloween Special