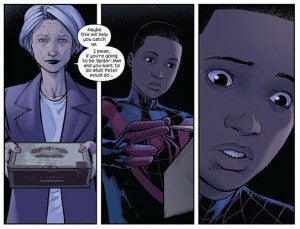 Miles Morales, the lead character in Ultimate Comics Spider-Man, completed his Spidey-chic outfit today when May Parker brought him a box containing her late nephew's webshooters, a key part of the Spider-Man mythos both inside and outside of the Ultimate Comics universe. Ultimate Comics Spider-Man #14, out today, featured the scene, in which May passed Peter's favorite tool on to Miles but then advised him, "Don't do what Peter Parker would do--do what Miles Morales would do." In an interview with Comic Book Resources, series writer Brian Michael Bendis talked about the iconic accessories:

This is a cool moment for Miles. It's like being handed Excalibur because he's not just getting web-shooters, he's getting Peter's web-shooters. It's funny, a lot of people wanted this to happen in 'Spider-Men.' I got letters saying, 'Just have him hand over the web-shooters.' It's funny because I thought about it and went, 'Peter needs his web-shooters.' Just because you meet someone you like doesn't mean you give them your car. How is he supposed to get home? So it didn't seem appropriate for the Marvel Universe Peter to hand over his web-shooters, but it did let Aunt May see Peter with Miles," Bendis continued. "She was focused on Peter, but Miles was there too. So there's Aunt May looking at Miles a little differently and thinking, 'My Peter would want him to have these.'