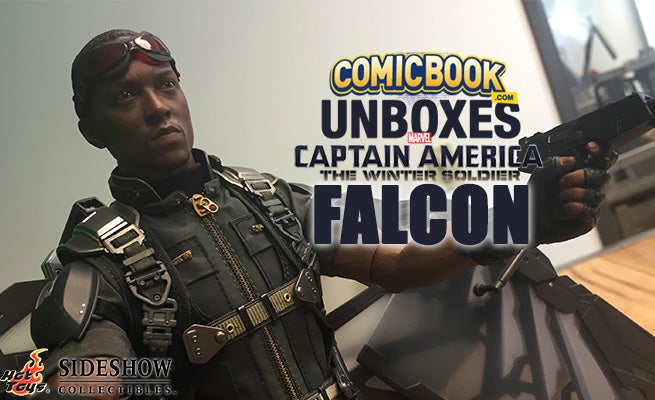 If you're a fan a Captain America: The Winter Soldier, chances are, one of you're favorite parts of the movie was watching Anthony Mackie take flight as Sam Wilson, The Falcon. Shortly after the movie's release, Hot Toys unveiled a line-up of figures which included The Falcon character. Luckily for us, our friends at Sideshow Collectibles sent us the figure to open up and share with all of you, and take it from me- it's as awesome as it looks.

You can watch the unboxing video below to see all of the accessories and details the figure comes complete with.

Packaging- The packaging fits the tone of Captain America: The Winter Soldier. It's sleek and bad-a--. You can see an image of The Falcon taking flight on the outside, joined by a few movie title logos, and once you open the box you'll be greeted by a proud photo of The Falcon figure. From there, you'll find the figure, the accessories, attachable extras such as his light-up jet pack, and a stand, all in different compartments of easy to open plastic.

Aesthetics- The figure is incredibly detailed. The wings, jet pack, and other parts have wear and tear detailed onto the figure to give a realistic look. The face resembles Anthony Mackie brilliantly and really delivers the look of the Falcon. Nothing is left out- the zipper is real, the buckles stand out, and the boot straps not only look, but feel real.

Posability- The figure comes with extra sets of hands for different poses. Whether it be holding on the wings or pointing guns, The Falcon figure is ready to stand proudly or soar into battle. There are more than enough joints to bend the figure to your liking, including ankles, wrists, head, neck, elbows, knees, and more. It stands 12 inches tall (excluding the stand) and is a great size for display or taking photos.

Overall value- You get what you pay for. At $249.99 it may be a price that hinders smaller fans away, but anyone who purchases it will be satisfied upon delivery. The Falcon figure from Hot Toys can definitely stand beside even your most detailed, favorite figures and garner plenty of attention.

Want to see more photos of the figure or to order one of your very own, head on over to Sideshow Collectibles by clicking right here!